I'm really excited to participating in Australian Blog Tour for the third, and final novel in Jaclyn Moriarty's The Colours of Madeline series, A Tangle of Gold thanks to Pan Macmillan!

This series has been a spectacular addition to the YA genre thanks to an Aussie author who I'm thrilled to be interviewing on the blog today :) 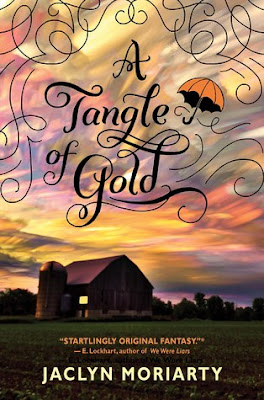 Cello is in crisis. Princess Ko's deception of her people has emerged and the Kingdom is outraged: The Jagged Edge Elite have taken control, placing the Princess and two members of the Royal Youth Alliance under arrest and ordering their execution; the King's attempts to negotiate their release have failed. Color storms are rampant, and nobody has heard the Cello wind blowing in months.

Meanwhile, Madeleine fears she's about to lose the Kingdom of Cello forever. Plans are in place to bring the remaining Royals home, and after that, all communication between Cello and the World will cease. That means she'll also lose Elliot, now back in Cello and being held captive by a branch of Hostiles. And there's nothing he can do to help his friends unless he can escape the Hostile compound.

Worlds apart and with time running out, Madeleine and Elliot find themselves on a collision course to save the Kingdom they love, and maybe even save each other.


Add on Goodreads or check out my 5 star review!
Check out my reviews of A Corner of White and The Cracks in the Kingdom too! 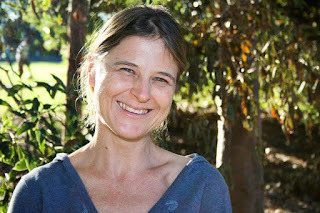 Hi Jaclyn and congrats on the release of A Tangle of Gold! I know this must be a very exciting and busy time for you, so I’m grateful to you for taking the time to answer a few questions of mine today.

Let’s get started, shall we?

I know I’ve already said it, but congratulations once more on the release on the third and final novel in the series, A Tangle of Gold. What’s the experience been like for you; releasing the final novel as opposed to the first? Have you found the process is that much different?
Thank you! Well, with first book, I decided that I wanted a book launch party, and imagined various things at the party (colourful cupcakes and cocktails! ocean views! champagne, lanterns, fireworks! opera singers, cello players, tango dancers! and so on), and then began to wonder exactly where and how I would hold this party, and then became uneasy about the extravagance of the party, and uncertain about where my dreams ended and reality began, and I wound up having pizza at home to celebrate. With this book, I am still at the stage of wanting a book launch party and imagining the trapeze artists! the jugglers! the lions! the coloured paints for everyone to splatter each other! (guests will have to wear some sort of protective clothing?)––and I am sensing a similar outcome.

For those who haven’t yet read the series, can you describe it in one sentence?
A girl who lives in Cambridge, England, begins writing letters to a boy who lives in the farming province of the Kingdom of Cello, through a crack between dimensions that opens up in a parking meter. Oh, I’ve used up the sentence and I haven't come close to encapsulating the series. But that’s a start.

In the lead up to this tour, I’ve been reading the series from beginning to end myself and though I’m a latecomer to Madeline and Elliot’s adventures, I am absolutely loving it! Do you find you have a bit of a mixed base of readers? Those who are just discovering The Colours of Madeleine as opposed to those who have been there since the beginning? [Note: I’ve actually taken real pleasure in starting the series late--all the books having been released which means I can finish one and then jump STRAIGHT into the next ;) ]
Thank you so much! I’m so happy to hear you’re enjoying it. And yes, definitely there are a mixture of readers. I know some readers prefer to wait until all three books are out before they start the first so they don’t get frustrated and impatient waiting. And I know other readers who are feeling frustrated and impatient as this third book took longer than I expected. I saw that a reader had commented on somebody else’s post on Instagram, ‘Why is the third book taking so long? I guess the author’s just sitting around taking her time,’ and I wrote back, “HEY!!! NO, I’M NOT, I’M TRYING REALLY HARD!’ or something like that. I probably scared them.

Where did the inspiration for the Colours of Madeleine series actually come from? There are so many unique concepts throughout the three books—where did these ideas come to you?
A long time ago I was living in Montreal, Canada, and I went to a cafe to work on my latest book. I took along a notebook that a friend had given me - it was covered in soft red suede - and, when I opened it, I discovered a row of small coloured pencils in little pockets on the inside cover. This was a snowy day in Montreal, and I had a chocolate croissant and good coffee, and something about all this, and the surprise of the coloured pencils, made me decide to draw pictures of a kingdom. That became the Kingdom of Cello. I drew a lot of pictures that day and many of those concepts ended up in the book (including the butterfly child and the Lake of Spells), but the idea of the Colours came to me years later when a friend asked me about monsters in Cello. A lot of other ideas came to me while I was reading science books.

If you had the chance to visit the Lake of Spells, what three spells would you want to take home? [Note: For those who have yet to read the series, the Lake of Spells is a lake where children of Cello can go and catch spells.]
A spell that would make me fly; a spell that would organise my entire apartment, including throwing away all the junk, arranging documents in beautiful filing systems, tidying my wardrobes, cleaning out the fridge and kitchen cupboards etc,etc; and a spell that would send compassion, generosity, kindness and rationality flying through the world. That last spell occurred to me a bit too late: I should have started with the world-changing spell. All three spells would have to be extremely powerful and would be really tricky to catch. But you may as well aim high.

There are SO many amazing characters in this series. Are there any you enjoy writing about just a little bit more than the others?
Thank you! I liked all the characters in these books, and felt close to them all. But I always enjoy writing characters with powerful personalities, especially when they also have strange speech patterns. So I think my favourites might have been Samuel, Princess Ko, Sergio and little Corrie-Lynn.

Let’s talk about the plot twists and developments in this series. Now I’m not going to give anything away, but there are some real game changers revealed. Did you set out writing the series with these in mind, or did they come to you as you progressed through each book like it seems to happen to a lot of authors?
A little bit of both. I planned this trilogy more comprehensively than most of my other books, so I knew a lot of the twists before I started. But some just happened and took me by surprise
And certainly your readers.....

What’s something readers might be surprised to learn about you?
I had two horses when I was a teenager, named Jagger and Roy, and loved them, and spent a lot of time talking to them every day, even though I am extremely allergic to horses and had to run inside and put my head under a cold tap every ten minutes or so.

If you could pick your own Royal Youth Alliance and make it up of three people, real or fictional, dead or alive, who would you choose and why?
Jane Austen, Mark Twain, Einstein. Because they’re all bright, funny and fascinating, and because those are the first three names that occurred to me and if I don’t use them I’ll take days trying to decide.

With Colours of Madeline concluding, what’s next in the cards for you? Could readers maybe see a spin-off series in the future, perhaps featuring Corrie-Lyn? Or do you have something completely different planned next?
How did you know that I wanted to write a spin-off series featuring Corrie-Lynn?! That’s exactly what I had in mind. I love Corrie-Lynn and I know she wants to have adventures. However, that will all happen in the future: at the moment I am working on four different books. One is about a girl whose parents ran away to have adventures with pirates; one is about a woman who joins a self-help course which claims it will teach her to fly; one is a new Ashbury-Brookfield book about Emily’s younger brother; and one is about time travel. Also, I want to write a book about my great-grandmother and have been interviewing my Great Aunty Ivy about her - Aunty Ivy grew up in an orphanage and has an amazing memory for detail.
Yay! A Corrie-Lynn spin-off! I'm super excited about this prospect--I think Corrie-Lynn has a lot of stories and adventure in her!

Thanks again for chatting with me! I've loved reading The Colours of Madeleine series and I look forward to trying some of your other novels in the future too!
Thank you for the kind words and the great questions! J x

Jaclyn Moriarty grew up in Sydney's north-west and studied Law and English on three continents - at Sydney University in Australia, Yale in the US and Cambridge in England. She spent four years working as a media and entertainment lawyer and now writes full-time so that she can sleep in each day. She lives in Sydney.


Don't miss the rest of the tour!﻿ 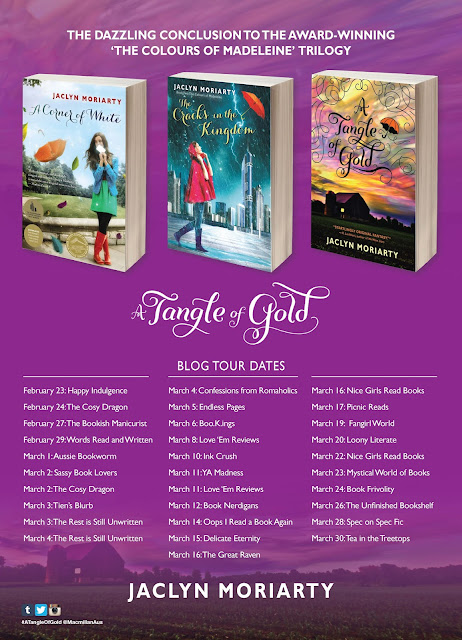