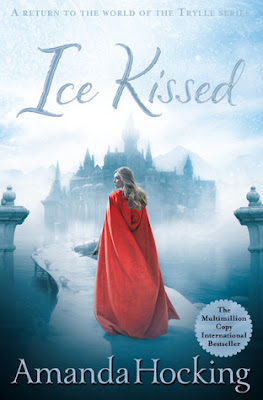 The second novel in the Kanin trilogy, from the international bestseller Amanda Hocking.

In this series, we return to the world of Hocking's million-copy bestselling Trylle trilogy...

Bryn Aven is still struggling with her burgeoning relationship with Ridley. She's also set on completing her mission to find the missing Skojare Queen. But when they do finally discover what happened, Bryn finds out that things are much more complicated than she'd originally thought.

And as she gets closer to the truth, Bryn is framed for the murder of the Kanin King himself. She ends up on the run, as home holds too few answers and no solutions.

Ice Kissed is the second book in Amanda Hocking’s Kanin Chronicles and is another brilliantly told story full of excitement, mystery and danger. Fast paced, mysterious and with just the perfect hint of romance, Ice Kissed is a wonderful follow-up to the first book in this series!

After the events of the first book, Bryn Aven is struggling to reconcile what she’s always believed with the doubts she’s starting to have. All Bryn has ever wanted was to serve her King and become a part of an elite group of warriors. Now Bryn doesn’t know who her loyalties should lie with and even worse, the Skojare Queen Linnea is still missing, something that upsets Bryn greatly. When Bryn gets an unexpected a lead on Linnea’s whereabouts, she and Ridley set out to find the missing Queen, only to slowly discover that things are even more complicated than they first appeared. Soon it becomes clear that determining who’s good and who’s bad may not be as easy as they first thought and with time running out and the threat from Viktor hanging over the Kanin people, Bryn finds herself right in the middle of everything once more and soon realises that doing the right thing may cost her greatly…..

I honestly really love this series! I think Amanda Hocking has created an even more beguiling world than the one she created in Switched, where Kanin politics, betrayal and deception all weave together. The story is endlessly mysterious and hides a lot of secrets, whilst still managing to be fast paced and exciting. There’s danger around ever turn and I never know what’s going to happen next, nor do I know the motives of many of the characters or where their loyalties lie. Hocking continues to keep me on my toes, even as I become more determined and eager to see Bryn uncover the truth behind all the strange goings on in both the Kanin and Skojare kingdoms.

I really like Bryn as our heroine. Personally I think she’s someone you can really get behind. She’s surer of herself than Wendy was in the previous series, something I’m putting down to age and experience. As a nineteen year old woman, Bryn has seen enough of the world and experienced enough to be able to take care of herself. I love the fight in her, and how much she strives to uncover secrets and get to the very heart of things—Bryn doesn’t let things go easily; something that possibly gets her into more trouble than she needs, but definitely makes for fabulous reading.

I’m adoring all the characters Hocking includes within the Kanin Chronicles to support Bryn so far. Bryn has a great bunch of friends including Ember and Tilda and even the different royals intrigue me in different ways. I really enjoy her romance with Ridley and the dynamic they share. I like the way Hocking has built on their relationship and where she has them heading. Admittedly, they’re relationship won’t be the easiest one considering he is her boss, but I’m personally looking forward to seeing how everything works out for them in the final book.

The cliffhanger ending of Ice Kissed leaves me breathless for the next novel and really excited to see how Amanda Hocking concludes this series. Ice Kissed was fast paced, entertaining and a wonderful read and I have no doubt this series is going to go out with a bang!

Source: Sent for review by Pan Macmillan Australia (Thank you Alana!)
Format: Paperback
Buy it: Bookworld | The Nile | The Book Depository | Amazon
My Recommendation: This is a fantastic fantasy series definitely worth a read.
Cover: I think it's really beautiful and lyrical
Will I read sequel/continue with series: Yes!