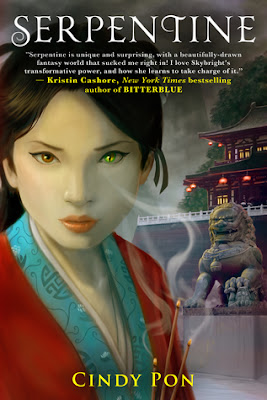 Serpentine by Cindy Pon
Releases on: September 8th 2015
Add on Goodreads!
SERPENTINE is a sweeping fantasy set in the ancient Kingdom of Xia and inspired by the rich history of Chinese mythology.

Lush with details from Chinese folklore, SERPENTINE tells the coming of age story of Skybright, a young girl who worries about her growing otherness. As she turns sixteen, Skybright notices troubling changes. By day, she is a companion and handmaid to the youngest daughter of a very wealthy family. But nighttime brings with it a darkness that not even daybreak can quell.

When her plight can no longer be denied, Skybright learns that despite a dark destiny, she must struggle to retain her sense of self – even as she falls in love for the first time.
Thoughts:
Few people know I'm actually a real fan of Cindy Pon's Kingdom of Xia series and I'm super excited to get to revisit the Kingdom of Xia world with Serpentine! I really loved the Kingdom of Xia books and I'm ready to get lost in this world once more!
What do you think of Serpentine? Is it something YOU might read?
And what are you waiting on this week?