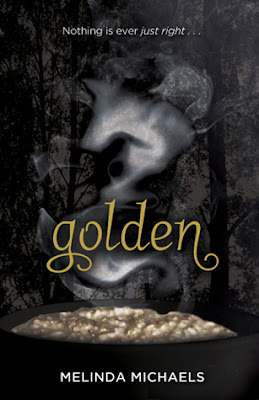 High school senior Hanna Loch just suffered a blackout in front of her entire homeroom class. She hasn't had one in over ten years, and she’s terrified—the last time she blacked out, she woke up with no memory of her life before. To make matters worse, no one can explain why it happens. For Hanna, bad things tend to come in threes.

When she learns she could be a descendant of someone who lived once upon a time, Hanna must put her trust in William Vann, a descendant of one of the most hated villains ever known. Their histories are intertwined in more ways than she expected, and he has answers about her past, answers even her family won’t share.

But is it safe to put her trust in someone who appears to be danger reincarnate, while trying to escape the darkness that tried to kill her ten years ago?

Golden is a highly entertaining debut novel by Melinda Michaels that is sure to please fairy-tale buffs whilst still managing to feature its own unique and worthy storyline that you won’t necessarily want to end.

Golden follows Hanna Loch, a normal teenager who has been experiencing nasty blackouts for some time now and who strangely has no memories of her life before she was eight years old. With no one around her willing to explain her lack of memories, Hanna has reluctantly let things go, but her frustration reaches breaking point when she meets William Vann, an alluring young man who everyone warns Hanna away from and who has ties to Hanna’s past she never could have imagined…….

It’s very hard to describe the storyline within Golden without giving away too many of its secrets. In a way it’s a bit Once Upon A Time meets your general YA novel, but I enjoyed how Michaels hinted at various fairy tales without going into too, much depth during the novel. The idea of who Hanna is was interesting, but it wasn’t explored too much to be over baring. Like with Once Upon A Time, I would very much like to explore some of the other characters and their histories as well, but at this point I don’t know what Melinda Michael’s plans are to revisit Hanna and her world.

Hanna was genuinely likable and I liked she had some fire in her. The relationships she had with those around her were strong and I loved how she reacted to situations she found herself in; it was believable, but still encouraging.

Obviously Hanna’s relationship with William Vann is something readers will expect, but that doesn’t subtract from actually seeing them fall for one another. There’s an undeniable attraction there, possibly made stronger by all the people who warn Hanna away, but I honestly thought Hanna and William were a great couple and not only did I enjoy seeing them interact, but I felt their chemistry.

There were a couple of chapters told through William’s POV in Golden and I thought it was excellent they were included. While Hanna was still the one we predominantly followed, seeing through William’s eyes on occasion allowed me to understand what he was thinking and better understand some of his motivations and feelings.

Wonderfully detailed, and nicely paced, Golden does enough in the opening chapters to capture your attention and keep it all the way through. Though I’m sorry to leave Hanna and William, Melinda Michaels ends the story perfectly, and I can only hope to get to follow some of the characters once more on day…..


**Update: Since writing my review I've learned there will be additional novels set in the world we discover within Golden, and I'm looking forward to devouring them!**

Source: Sent for review by the author (Thank you Melinda!)
Format: Kindle ebook
Buy it: Amazon | Barnes & Noble | Kobo | Smashwords | Reuts
My Recommendation: If you love fantasy and fairytale retellings you're sure to enjoy this!
Cover: The cover doesn't blow me away and doesn't betray much about the story, but there is something about it's simplicity I like.
Will I read sequel/continue with series: Yes, I'm looking for to discovering more about this world!