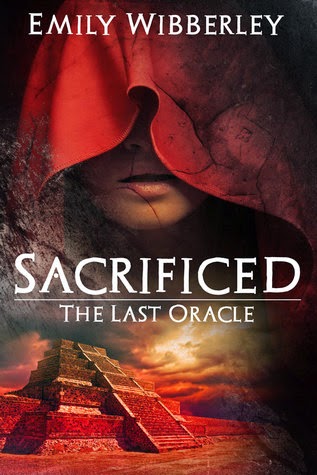 Fifteen-year-old Clio should have never been the Oracle of Sheehan. That power is passed from mother to eldest daughter, and Clio is the youngest of four sisters. But when her entire family is murdered by Mannix, the king's adviser, Clio is left all alone and heir to a power she never wanted and doesn't understand.

Hunted by Mannix, Clio seeks refuge in a foreign city where oracles are absolutely forbidden. If she's found out, she will be sacrificed atop its great pyramid.

Clio has no choice but to win the trust of Riece, an enemy warrior. Despite the growing feelings between them, Clio knows that if he finds out who she really is, he won't hesitate to kill her.

Clio tries to hide her budding powers, but the visions she has of Mannix bringing a barbarian army into Sheehan torture her conscience. She alone has the strength and foresight to stop him, but only if she can embrace her destiny and sacrifice everything.

Sacrificed by Emily Wibberley is an exciting fantasy tale that catapults the reader into a harsh desert land where blood stains the sand and our heroine is about to find herself on a tremendous journey is the first novel in a promising new series!

Sacrificed is told through the eyes of fifteen year old Clio, a young woman from the city of Sheehan and the daughter of the lands Oracle. As the youngest of four daughters, Clio has watched as each other her sisters have been called to serve their Oracle mother and their deities, and has suffered the pain of seeing her sisters wither into shadows of their former selves. Wanting nothing to do with her mother’s duties, Clio’s life is forever changed when her family is murdered and she discovers that the abilities and powers held by the Oracle she always believed false are very real and have been passed on to her.

Fleeing to the neighboring and enemy land of Morek to escape the priest Mannix who was responsible for her family’s deaths, Clio finds herself imprisoned at the hands of Morek forces, but quickly discovers that the enigmatic young Commander Riece who leads the troops is not the heinous enemy Clio believes him to be. Slowly beginning to trust Riece, Clio discovers that there is something bigger in play than just her families murders and as she begins to reluctantly fall for Riece, Clio discovers that bigger plans are in motion and Mannix plans effect more than just Clio, they affect all of Sheehan, and possibly Morek…..

Admittedly, Sacrificed started slow for me. Though solidly written, the first couple of chapters had me questioning the strength and entertainment of the story. However, once Clio finds herself on the run, I found myself instantly swept up into her story and was extremely captivated. I found it quite hard to be the story down if I’m honest. The main character was strong and her fight was one you couldn’t help but get behind, and the chemistry she had with the young Commander she meets in Morek was one I seriously adored!

Emily Wibberley has written a very interesting story with Sacrificed. Sacrificed takes place in a fictional land that can be compared to that of Ancient Egypt and sees the heroine discover unexpected truths about herself. Personally I think Clio comes across as older than fifteen. Her voice within the story would easily pass for sixteen or seventeen, but considering the ancient feel of Sacrificed, I can understand why author Emily Wibberley wrote her at this age. In ancient times, most people didn’t live as long and as such they matured, married and started their adult lives earlier than people do now.

I quite liked Clio in this book. She was easy to follow and seriously stepped up at times. The growth she undertakes from the beginning of Sacrificed to the end is extensive and I can only imagine where Wibberley plans to take her in the rest of the series. Clio was kind and caring, and really someone you couldn’t help but enjoy. I appreciated the way she saw the world and liked that she was intelligent and knew how to hold her own verbally with the likes of Riece.

Clio finds herself with two love interests in Sacrificed. Her childhood companion Derik and the formable Commander Riece who becomes an unexpected alley in Morek. Let’s put it this way….forget Clio, I want Riece! As far as I’m concerned, there really is only one option for Clio in this story and that’s Riece.

From the moment they meet the sparks are off the chart and considering what an amazingly honorable, honest and kind man Riece is, there was never any doubt in my mind that Clio was going to fall for him. Despite his powerful position, Riece is a caring person who is absolutely brutal when he needs to be, but he can’t help but be drawn to Clio. Clio and Riece have a great chemistry and I enjoyed the witty banter exchanged by them throughout the novel. They just oozed attraction despite coming from different worlds and I loved the fierce way Riece came to love Clio and the determination he had to stand by her side.

Emily Wibberley introduces readers to an intriguing world in Sacrificed with a strong heroine, plenty of unexpected twists and a romance you can really  get behind. I wasn’t ready for the novel to end when it came to its eventual close and I find myself eagerly anticipating the release of the next installment to see what will happen next and to follow Clio and Riece once more!

Source: Sent for review by author (Thank you Emily!)
Format: Kindle ebook
Buy it: Amazon
My Recommendation: If you enjoy a good fantasy story, be sure to check this out!
Cover: I really dig this cover--it's very striking.
Will I read sequel/continue with series: Absolutely!