Today as part of my Happy Birthday Escape Publishing fun, I have Bitter Fruits author Sarah Daltry on the blog to talk about all things Bitter Fruit!

Hi Sarah and thanks for agreeing to chat with me today as part of Escape Publishing's 1 year celebrations. I'm looking forward to talking to you, so we better get started.......

Describe your heroine Nora in one sentence?
Snarky 

A little birdy told me that Bitter Fruits features two very different, but equally beguiling brothers vying for Nora's affection. What do you think is the appeal of writing a love-triangle featuring siblings?
Honestly, I don’t normally care for love triangles. I always feel bad for the guy who doesn’t get the girl. However, in this case, the love triangle is critical to the plot and to the future of the series. It’s based on Biblical mythology and the events that unfold require many of the elements, including the love triangle.

Talk us through your writing process? What goes into a typical writing session for you?
Oh, I am all over the place. I was just thinking I need to get more disciplined. I have days where I write all day and I’m totally in the zone. Then I will have periods of time where I’m writing 1000 words a day in five different books. And then I have times where I do nothing but think about how I SHOULD be writing!!

Have you always wanted to write?
I don’t know. I think so. I’ve always written, because stories are important to me. I’m an avid reader and have been since I was a child. I majored in English. I taught English. I was an actress for a while. I’m a hardcore gamer. I worked in film and studied cinema for a bit. Basically, I try to take in stories through any means I can, so I guess it was just natural to tell my own.

What's something we'd be surprised to learn about you?
Probably that I am a ridiculous nerd. I tried to keep it under wraps for a while, but it’s hard to be someone other than yourself. I’m starting to let it out and I’m okay with that. I think because I write a lot of steamy stuff, people think I’m very girly and very romantic, but I’m not at all. I’m a sarcastic gamer geek who would rather play Xbox than go on a romantic date!

I know some authors tend to think of their books as their babies, but is there a story of yours that holds a special place in your heart over others? And if yes, why?
On an emotional level, my novel Lily of the Valley is close to me, because I put a lot of my own experiences – the dark ones – into it. I went through a lot when I was younger and it was hard to face some of those demons, but I think it was necessary in telling that story.

What's been your most memorable experience working with and being a part of Escape Publishing? Everyone is just awesome. I really love how responsive they are and how supportive they are. Not just Kate and everyone at Escape, but all the other authors, too! It’s like a family. 

What's next in store for you? Can readers expect a sequel to Bitter Fruits?
Yes, for sure, to the second question. This is a planned trilogy. As far as when, that answers the first. I’m in the middle of so many things right now and I know Kate is being patient, but the sequel is definitely a priority. I struggle to stay in one world at any given time and I need the characters to be ready to talk to me when I write. Lately, there are too many voices. I’m trying to slow it down a little and ask some characters, nicely, to step aside momentarily.

6 Quick Questions:
1. Favourite colour? Purple
2. Day or Night? Night
3. Ebook or Physical book? Both. I read ebooks faster, but I love old books. I love the way the smell, the way the pages feel, the stories behind them. I also love used bookstores and you need physical books for them to exist.
4. Favourite Song? "Firework" by Katy Perry is my motivational song.
5. Lucky Number? 4
6. Singing or Dancing? Singing. I don’t dance!

I just wanted to say thank for again for stopping in for this little Q&A Sarah. It's been fun! Good luck with your writing in the future!

Sarah Daltry writes about the regular people who populate our lives. She's written works in various genres - romance, erotica, fantasy, horror. Genre isn't as important as telling a story about people and how their lives unfold. Sarah tends to focus on YA/NA characters but she's been known to shake it up. Most of her stories are about relationships - romantic, familial, friendly - because love and empathy are the foundation of life. It doesn't matter if the story is set in contemporary NY, historical Britain, or a fantasy world in the future - human beings are most interesting in the ways they interact with others. This is the principle behind all of Sarah's stories.

Sarah has spent most of her life in school, from her BA and MA in English and writing to teaching both at the high school and college level. She also loves studying art history and really anything because learning is fun.

When Sarah isn't writing, she tends to waste a lot of time checking Facebook for pictures of cats, shooting virtual zombies, and simply staring out the window. 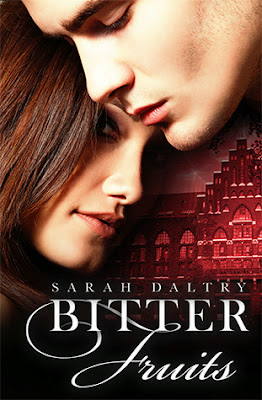 For fans of dark urban fantasy comes a novel that questions why forbidden fruit is always the most tempting...

A vampire-themed masquerade party isn’t really her scene, but Nora is sick of frat parties and bars. When she meets Alec, the appeal suddenly becomes clear. It’s obvious that they’ve been struck by the same intense mutual attraction, but Alec keeps his distance. Intrigued despite herself, Nora pushes a little deeper — and discovers Alec’s unimaginable secret...

Nora is not afraid of following Alec into the darkness, but the choice is soon taken from her. Someone is hunting her — someone tied to the secret and desperate to see it play out. But when Nora finally meets her aggressor, she finds herself hopelessly drawn to him. She needs to make a choice between the two men, but can she save them both, knowing one is destined to die?

Details:
For your chance to win a YA bundle featuring Words Once Spoken as well as four other fabulous stories, be sure to comment with a way to contact you!
Sharing isn't necessary, but always appreciated :)
Open internationally!
**On Wednesday I have a Finding Home by Lauren K. McKeller excerpt to share with you guys!**