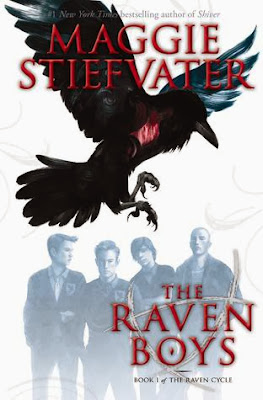 “There are only two reasons a non-seer would see a spirit on St. Mark’s Eve,” Neeve said. “Either you’re his true love . . . or you killed him.”

It is freezing in the churchyard, even before the dead arrive.

Every year, Blue Sargent stands next to her clairvoyant mother as the soon-to-be dead walk past. Blue herself never sees them—not until this year, when a boy emerges from the dark and speaks directly to her.

His name is Gansey, and Blue soon discovers that he is a rich student at Aglionby, the local private school. Blue has a policy of staying away from Aglionby boys. Known as Raven Boys, they can only mean trouble.

But Blue is drawn to Gansey, in a way she can’t entirely explain. He has it all—family money, good looks, devoted friends—but he’s looking for much more than that. He is on a quest that has encompassed three other Raven Boys: Adam, the scholarship student who resents all the privilege around him; Ronan, the fierce soul who ranges from anger to despair; and Noah, the taciturn watcher of the four, who notices many things but says very little.

For as long as she can remember, Blue has been warned that she will cause her true love to die. She never thought this would be a problem. But now, as her life becomes caught up in the strange and sinister world of the Raven Boys, she’s not so sure anymore.

From Maggie Stiefvater, the bestselling and acclaimed author of the Shiver trilogy and The Scorpio Races, comes a spellbinding new series where the inevitability of death and the nature of love lead us to a place we’ve never been before.

The Raven Boys is the positively beguiling first installment in Maggie Stiefvater’s new The Raven Cycle series and marks the thrilling introduction to what I have no doubt will become another Maggie Steifvater classic!

As an author, Maggie Stiefvater is a masterful storyteller. I fell in love with Stiefvater and her writing a long time ago after reading Lament: A Faerie Queen’s Deception and its subsequent sequel afterwards. Once her Shiver Trilogy and the Scorpio Races were released I devoured those as well, and with each world she created, Steifavter managed to sweep me up into an adventure unlike anything I had read before. I’m thrilled to say, The Raven Boys is no exception to this rule.

From the very beginning, The Raven Boys is a mysterious and addictive read. Steifvater has immense talented for creating unique and intricate storylines that are full of mystery and are extensively driven. There’s always one secret after another to discover and each marks a different progression within the storyline. The Raven Boys was one of those books.

Told though the various POV’s of Blue Sargent and "raven boys", Gansey and Adam, The Raven Boys weaves together different aspects of the lives of all characters involved to create a plotline that never seems to let up. I will be honest and say that there were a few times where I found myself confused in the beginning, and I had to read extra carefully to understand, but I feel that was only due to the fact Stiefvater was slowly revealing certain hints and revelations  in the story.

The characters within The Raven Boys were all very different, but all very likable. Each seemed to bring a different aspect to the story, especially Blue and the four raven boys, Ganey, Adam, Ronan and Noah. The friendship that developed between the five of them had a great impact on the storyline. I really loved how Blue and the boys slowly bonded despite their different social standings—they formed a really sweet group to follow and read about.

I found the smidge of romance and the possibility of an intriguing love triangle forming between Blue and two of the raven boys in future books to be nice additions to the story. It wasn’t too much and too over the top; rather a sweet undertone of the adventure and mystery already front and center.

Featuring plenty of developments and possibilities, The Raven Boys was rife with secrets, magic and danger. The slight cliffhanger of the ending guarantee’s I’ll be picking up the second book as soon as I have a chance, as Maggie Stiefvater already has me invested in this world and the characters that inhabit it!

Source: Sent for review by Scholastic Australia (Thank you Sarah!)
Format: Paperback
Buy it: Bookworld | The Nile | The Book Depository | Amazon
My Recommendation: Maggie Stiefvater fans will not want to miss this one, but if you're a fan of unique, well told fantasy tales then this one's for you too!
Cover: I love how it depicts all the Raven Boys--very fitting. I just wished it showed Blue too.
Will I read sequel/continue with series: Absolutely!