Today, I have Rayessa and the Space Pirates author Donna Maree Hanson on the blog to guest post as part of my (almost over) Happy Birthday Escape Publishing celebrations! I'd like you all to welcome Donna!

Writing What You Love

There are a number of things that inspire me to write, as a writer and as a reader too. Writing what you love is a key element, I believe. I have ideas that come naturally to me. I spent a lot of my life in fantasy worlds in my head, either on a star ship or in a land full with magic. It’s what I read. It was my escape. I realized that writing what I was imagining legitimized this totally wasteful past time (cough) and anchored me, by providing an outlet for all my bottled up creativity. Now, I escape when I write and write what I love to imagine.

When I read, I find things that give me that ‘wow’ feeling, you know the one that starts in your toes and goes to your brain, a kind of inspirational short circuit. A few things that I love are Regency romance, Scottish historical romances, science fiction, fantasy (urban fantasy and paranormal romance too) and even horror. I adore steampunk and a bit of Victorian gothic horror. When I read something that has elements of things I like, I get excited. For example, steampunk fantasy romance for young adult readers. It’s hitting all my buttons for different reasons. I like this as a reader and I certainly like it as a writer. I always thought that a Regency period fantasy would be awesome, but then Susanna Clarke did that with Johnathan Strange and Mr Norrell. But I’m sure I’ll come up with something new and exciting eventually.

After a good thirteen years learning the craft of writing, I like to experiment and play around with elements of genre, mash it all together. I mean the characters are the important things, but the bells and whistles of setting and tropes dress them up and let you have fun. Rayessa and the Space Pirates is supposedly a  young adult, science-fiction romance, adventure with a crime plot driver. Of course, I don’t think I intentionally did that when I wrote it. The story came out that way. I fell in love with the characters and they told the story. I know writers say that and people roll their eyes, but it can happen, particularly to pantsers (people who just write and let it flow, rather than plan and write an outline). Originally, I was trying to write a short story about this girl on an asteroid and I wanted to play around a little with a character who was an auditor (I audit for a living) and it was all going really well and getting longer and I thought yes I can resolve this story, when the pirates showed up. When they did, I realised it wasn’t a short story any more. I just went with it. I wrote what entertained me, what I love and really I had no idea of what the market for it could or would be.

The first real moment that inspired me to become a writer is when I had this idea for a character (actually the character appeared in a dream and I started asking who she was, how she got where she was) and there was enough story there for my first novel (still unpublished). Back in 2001, a novel where the character is in love with an alien warrior in a story with feminist undertones, didn’t really have a market (also first novels need lots of work to make them into books!). I had so much fun writing it. So write what you love, read what you love, inspire yourself. 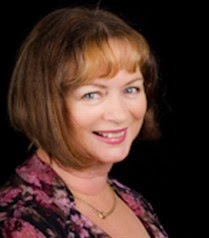 Donna Maree Hanson is a Canberra-based writer (actually she now lives across the border in Queanbeyan) of fantasy, science fiction, horror, paranormal romance and soon to be romance. She has been writing creatively since November 2000.

While she aspires to publish novels, she has had about 20 short stories published in various small press and ezines. In January 2013, her first longer work is due to be published with Harlequin Escape digital publishers (link here.) This novella length work is a young-adult, science-fiction adventure/romance (space opera). Title as yet unofficial! 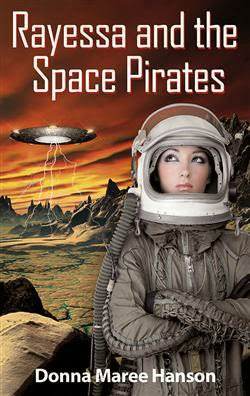 Sixteen-year-old Rae Stroder lives in a hollow asteroid, a defunct refuelling station, with a brain-damaged adult, Gris, to keep her company. Low on supplies, they've been eking out an existence for years. Everything changes when Alwin Anton, ultra-clean, smart and handsome AllEarth Corp company auditor, arrives to find disarray. Full of suspicion, he interrogates Rae, threatening her with prosecution for theft. He uncovers the fact that she is not Rae Stroder at all, when space pirates attack.

During the attack, Rae is taken prisoner and Alwin Anton escapes in his space ship. The pirate women prepare Rae for sale on the infamous Centauri slave markets. It's all going badly, when she is purchased by a mysterious Ridallian.

Meanwhile, the space pirates are out to kill Alwin Anton because he holds the secret to Rae's true identity. It's a race against time to unravel the intrigue of Rae's past to secure her future.

Details:
For your chance to win a YA bundle featuring  Rayessa and the Space Pirates well as four other fabulous stories, be sure to comment with a way to contact you!
Sharing isn't necessary, but always appreciated :)
Open internationally!
**Stop by on Monday for my FINAL Happy Birthday Escape Publishing post--I'll be hosting I Dream of Johnny author Juliet Madison on the blog for a chat!**