Teaser Tuesdays is a weekly bookish meme, hosted by MizB of Should Be Reading. Anyone can play along! Just do the following:

• Grab your current read
• Open to a random page
• Share two (2) “teaser” sentences from somewhere on that page
• BE CAREFUL NOT TO INCLUDE SPOILERS! (make sure that what you share doesn’t give too much away! You don’t want to ruin the book for others!)
• Share the title & author, too, so that other TT participants can add the book to their TBR Lists if they like your teasers!

He turns his head and looks at me with danger-filled eyes. In three steps he's in front of me, his hands on my bare shoulders, fingers digging into my skin. "Fo, I'm a man, and you're a beautiful woman. But you're also a Level Ten, and when I look at you, especially when you're dressed like this, I can't think straight, because even though my brain tells me you're the most dangerous thing I've ever encountered, my heart.....my body--" His mouth snaps shut and he stares deep into my eyes.

I get it, what his heart and his body are doing, because mine are doing it too. I ache for [name removed due to spoilers], for everything about him. His smell, his touch, the sound of his voice, his presence. I tilt my head to the side and trail my fingers over his freshly shaved jaw line. He shuts his eyes and leans into my touch..... 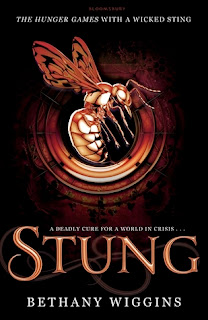 In a world in crisis, children are the future. Part of the cure. Not now. Children are deadly. Marked one to ten. Fiona is a TEN. She just doesn't know it yet . . . She doesn't know her true strength.

Fiona doesn't remember going to sleep. But she has woken to find her entire world has changed - her house is abandoned and broken, and her neighbourhood is barren and dead. Even stranger is the tattoo on her right wrist that she doesn't remember getting but somehow knows she must cover at any cost. And she's right. When the honeybee population collapsed, a worldwide pandemic occurred and the government tried to bio-engineer a cure. But instead the vaccination turned people into ferocious, deadly beasts. They have been branded as a warning to unvaccinated survivors. Key people needed to rebuild society are protected inside a fortress-like wall. Fiona has awakened branded, alone and on the wrong side of the wall....