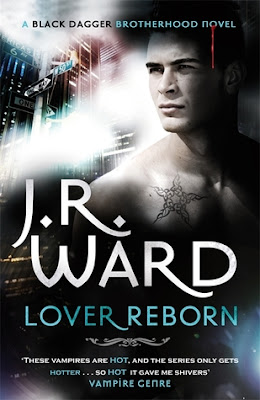 Ever since the death of his shellan, Tohrment has been a heartbroken shadow of the vampire leader he once was. Brought back to the Brotherhood by a self-serving fallen angel, he fights again with ruthless vengeance, unprepared for a new tragedy. Seeing his beloved in dreams—trapped in a cold, isolated netherworld—Tohr turns to the angel Lassiter to save his former mate. The only way to rescue her is for Tohr to love another.

As war with the lessers rages, and a new clan of vampires vie for the Blind King’s throne, Tohr struggles between an unforgettable past and a hot, passion-filled future. But can his heart let go and set all of them free?

Lover Reborn by J.R. Ward tells the tale of Tohr; a broken shell of a Brother, destroyed and altered by the loss of his mate, a man who finally gets his story told.

I have to be honest here; Lover Reborn wasn’t my favorite of the Black Dagger Brotherhood books. Don’t get me wrong, there’s nothing wrong with it. I just struggled to really connect like I wished I could. For some reason I wasn’t as absorbed by Tohr’s tale as I expected to me.

Lover Reborn takes place over quite a long period of time; almost a year if I remember correctly. Understandably Tohrment has quite a journey in store for me. He’s still very much broken having lost his mate Wellsie some time ago. Tohr has to go through a number of different stages, from coming to accept his loss to finding room in his heart for another. This book displays everything it means to love again having loved before, especially on Tohr’s part.

I like Tohr, I do, but admittedly he is one of the less memorable Brothers for me. That being said, I did enjoy reading his story. After all the pain and recent loss he’s experienced, he deserved to find lasting happiness again. Those who know me will know I’ve been hoping Tohr would be paired with No’One since it became apparent that Tohr was going to get his own story and she was a new edition to the series, so suffice to say, I’m happy that she was his love interest in this book.

Overall I think these two are a great pairing. No’One (Autumn) has been through a tremendous life. The things she had done to her at the hands of the Sympath that impregnated her were horrendous and she does not know what it feels like to experience pleasure. Seeing her experience all this for the first time as she finds courage and herself was great to read about.

My only issue with this book was that Tohr irked me at times with his pathetic-ness. I understood his pain, I really did, but at times it seemed to much. His constant struggles over what his body wanted and his heart versus his guilt over betraying his dead mate was something that detracted too much from the connection and romance that developed between Tohr and his Autumn.

The continued involvement of the Band of Bastards proved to be really interesting and it was a shocker some of the things they did. And yet at the same time, I have high hopes for some of these characters and look forward to seeing what Ward does with this series next!

Source: I bought
Format: Paperback
Buy it: Bookworld | The Nile | The Book Depository | Amazon
My Recommendation: This series is a MUST READ for PNR fans!
Cover: Hmmmm. It's okay, I guess, but doesn't blow me away either....
Will I read sequel/continue with series: Yes! Without a doubt!