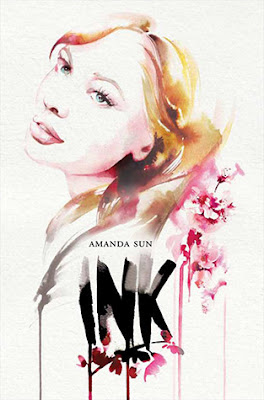 On the heels of a family tragedy, the last thing Katie Greene wants to do is move halfway across the world. Stuck with her aunt in Shizuoka, Japan, Katie feels lost. Alone. She doesn’t know the language, she can barely hold a pair of chopsticks, and she can’t seem to get the hang of taking her shoes off whenever she enters a building.

Then there’s gorgeous but aloof Tomohiro, star of the school’s kendo team. How did he really get the scar on his arm? Katie isn’t prepared for the answer. But when she sees the things he draws start moving, there’s no denying the truth: Tomo has a connection to the ancient gods of Japan, and being near Katie is causing his abilities to spiral out of control. If the wrong people notice, they'll both be targets.

Katie never wanted to move to Japan—now she may not make it out of the country alive.

Honestly, I’m not completely sure how to wrap my mind around Ink by Amanda Sun. The premise of this story is straight away catching and Amanda Sun does a good job of telling this unique story. Featuring the fantastically vivid setting that is Japan, Ink had the potential to be a knock out book, but in my eyes kind of fell flat at times. Now, I’m not in any way saying that it was bad book, it certainly wasn’t, but for some unknown reason Ink failed to live up to my expectations and capture me like I hoped it would.

I have to give Sun props for thinking outside of the box with her mythology and setting for this book. Showcasing plenty of mystery and quirky Japanese tradition, Ink blends together impressive Japanese mythology with all the fun, colour and flair that is uniquely Japanese pop culture. Featuring a fish-out-of-water feel, and considering our heroine is an American teen living in Japan, Ink braves a turbulent and exciting culture.

I did like this book. I feel I have to say that. While I wasn’t “sucked in” in the same manner I was expecting, Ink was well told and did manage to hold my attention throughout the majority of the book. I found it to be a pleasant read; the characters likable enough and the story mysterious.

I liked the main character Katie, although I admittedly struggled to connect with her at times; feeling disconnected and unsure about some of her decisions and reactions. Again, she was nice enough to read and I admired her spirit, although I’ll be the first to say me and her had our moments.

I enjoyed the way Katie interacted with some of the characters in this book her different relationships with them, from her aunt Dianne to her friends Yuki and Tanaka to her love interest, the mysterious and often conflicting Tomohiro. Again I liked Tomohiro “Tomo”; he and Katie had an intriguing and usually enjoyable connection, but I found myself unendingly frustrated by his up and down actions. I understood the place for his confliction within the story but that didn’t make it any less annoying at times.

Overall, Ink was a striking beginning to this new series by Amanda Sun and considering how much I enjoyed the different setting and unique elements in the book, I may just be persuaded to pick up its sequel…..

Source: Sent for review by HarlequinTEEN Australia (Thank you Polina!)
Format: Paperback
Buy it: Bookworld | The Nile | The Book Depository | Amazon
My Recommendation: If you're looking for something a bit different, a bit quirky, then Ink may just be for you.
Cover: Alright. The cover is stunning. Plain and simple
Will I read sequel/continue with series: Possibly. Undecided at this point, but maybe at some point.....