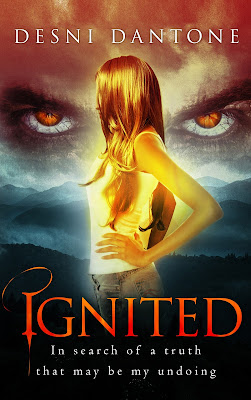 Seventeen year old Kris Young is on the run from a throng of superhuman golden-eyed freaks hell-bent on seeing her dead, and she doesn't know why. Good thing she has her guardian angel to protect her...sort of.

Kris is aided by Nathan, the mysterious man that ends up being anything but angelic when he rescues her for the fourth time in fourteen years. Even if the handsome hero illusion is shattered by his harsh treatment of her, he knows how to fight this strange enemy and is determined to keep her safe at all costs.

As the body count rises in their wake, Nathan introduces Kris to a world in which not everyone is human and the battle lines between good and evil are clearly drawn. Kris's piece in the puzzle is something neither is aware of and, as they uncover the truth, neither is prepared for what they find. Overcoming twists and revelations that shatter both of their lives, they discover that nothing is as it seems and nothing, least of all their hearts, are safe.

From debut author, Desni Dantone, Ignited is the first novel in a tale of first love, mystery and adventure that will introduce you to an exciting new world as Kris discovers how she fits in it.

Ignited, Desni Dantone's debut novel is a fierce, heart pounding, heart racing read full of action, danger and just the perfect hint of romance woven together with all the mystery, tension and excitement a girl could want!

Ignited was an unexpected delight! Initially I only began reading this book because I was caught out and about without my normal read. So….I decided to read a few pages of this on my phone to pass the time. Flash forward sixteen chapters later and I didn’t want to put this book down. Next day I was finished and absolutely in love.

My goodness did I love this book! I don’t mean to sound so surprised but Ignited in no way reads like a lot of self published novels. Perfectly told and paced, this book is catching from the very beginning and tells a really exciting story. I really liked the story author Desni Dantone has woven together. There’s a mysterious element that surrounds just what is going on it the story; what the characters are and what their history is and this remains unknown for a fair part of the novel.

Focusing on Kris Young, a seventeen year old girl who recently went through a tragedy and Nathan the dark and mysterious man who has been protecting and saving her since she was a child, and yet who hasn't aged a day, Ignited is filled with fantastic characters, especially in the form of Kris and Nathan and picks up quickly, taking you straight into a story that’s easily addictive.

Admittedly, I did see some similarities between Ignited and other novels I’d previously read, most notably Vampire Academy by Richelle Mead where certain situations were concerned and relationships between some of the characters, but I don’t feel like this overly detracted from the story. The mythology within Ignited also proves to be fairly unique--I'm very interested in seeing it explored more in future books.

I don't want to give away any spoilers but when Nathan and Kris are thrown together and forced to run, they're bombarded with one issue after another, rising the stakes and the tension and soon even the smallest, simple, mundane moments shared between them prove to be brilliantly addictive.

I seriously loved Kris. In the beginning of Ignited she starts out slightly fragile and vulnerable, but as the book progresses she manages to find her feet and takes everything in stride. She's extremely likable and I like the sass Nathan manages to bring out in her. Oddly enough, Nathan's attitude manages to spur Kris on and her desire to prove herself to him manages to make her all that much stronger.

One of the highlights of the book for me was the chemistry that sizzles between Kris and Nathan from the beginning. The sexual tension that radiates between these two as they fight and bicker and banter back and forth is electric. The thing I liked about them was that their relationship was in the form of a slow gradual build that went from them being strangers to in a reluctant mentor/ trainee relationship to friends.

Nathan is so sexy--my favorite kind of male; strong, fierce, determined and protective. He and Kris slowly come to care about each other, though Nathan is reluctant to admit it. These two are awesome to read about. I love that their relationship wasn't instant and yet you knew something was going to develop. It's obviously they have their fair share of hurdles to face, especially in the form of Alec, but I'm definitely vying for them!

There are quite a few story developments towards the end of Ignited that left me hanging out for the next book. After reading Desni Dantone's debut novel, I'm excited where she'll take Kris and the gang next and highly recommend you adding Ignited to your TBR list!

Source: Sent for review by author (Thank you Desni!)
Format: Kindle Ebook
Buy it: Amazon (Kindle) | Amazon (Paperback) | Smashwords
My Recommendation: Read it! This book will appeal to everyone with it's action, romance and high stakes!
Cover: Hmmmm. I like it....but I don't love it. It doesn't really do the book justice
Will I read sequel/continue with series: YES!

Like the sound of Ignited? Stop back on Saturday.....a little birdy told me I may be sharing an except and have a copy of the book to give away :D
Posted by Rachel at 12:00 AM