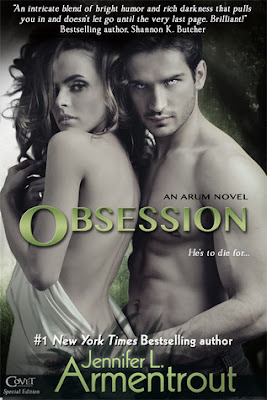 Hunter is a ruthless killer. And the Department of Defense has him firmly in their grasp, which usually doesn’t chafe too badly because he gets to kill bad guys. Most of the time he enjoys his job. That is, until he’s saddled with something he’s never had to do before: protect a human from his mortal enemy.

Serena Cross didn’t believe her best friend when she claimed to have seen the son of a powerful senator turn into something... unnatural. Who would? But then she witnesses her friend’s murder at the hands of what can only be an alien, thrusting her into a world that will kill to protect their secret.

Hunter stirs Serena’s temper and her lust despite their differences. Soon he’s doing the unthinkable—breaking the rules he’s lived by, going against the government to keep Serena safe. But are the aliens and the government the biggest threats to Serena’s life… or is it Hunter?

Hot on the heels of her undeniably successful Lux series, author Jennifer L. Armentrout gives readers an explosive glimpse into the "other side" of her world as she explores the Arum in a never before seen or expected way with her stand alone novel Obsession!

Okay, first off, I'm a massive Lux fan. Adore it, I really do. So in saying that, I've had certain set beliefs about the two sides that are at war with each other within the Lux series; the Luxen and the Arum. Featuring Luxen characters, the Lux books have detailed the Aurm as the evil ones of the two. Obsession explores this the other way round, and boy....did it open my eyes!

I think it was very clever of Armentrout to write this book. Seeing as the characters I love are Luxen, I've never stopped to think of the possibility of an even remotely good Arum. For me the Luxen were good, the Arum bad. In Obsession our male lead is actually an Arum and because of this we're allowed a never before seen view of this race of aliens.

Hunter is an Arum. Simple as that. He features true characteristics you'd expect of an Arum. He's dark and fierce and feeds on Luxen. He fights and he kills and makes no excuses for what he is and what he does. Hunter is a bad boy and while he's far from "good" he's in no way a bad person. At least not as far I'm concerned.

Jennifer L. Armentrout blurs the lines between her two alien races in Obsession and shows that individuals can be more than their natures dictate. Written in dual POV, Obsession follows Serena Cross, a human woman who witnesses her best friend's death at the hands of a Luxen and then her decent into the Arum world with Hunter. I really liked Serena. She was a normal woman and someone easy to read about.

Both her and Hunter had a great chemistry from the very beginning and with this book more Adult than any of the Lux books, Armentrout writes the relationship between them strong and fierce with the chemistry hot and the sex scenes hotter.

Action and romance run rampant in this book and with the banter that trades back and forth between Serena and Hunter pitch perfect, Obsession proves to be a great addition to the Lux world!

Source: I bought.
Format: Kindle ecopy.
Buy it:  Amazon | Barnes & Noble
My Recommendation: Fans of the Lux series don't want to miss that!
Cover: Pretty smoking!
Will I read sequel/continue with series: This is a stand alone, but I'm a fan of the Lux series, so I'll read more of that for sure!