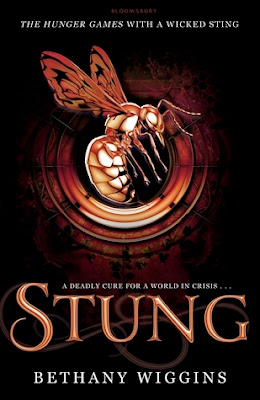 In a world in crisis, children are the future. Part of the cure. Not now. Children are deadly. Marked one to ten. Fiona is a TEN. She just doesn't know it yet . . . She doesn't know her true strength.

Fiona doesn't remember going to sleep. But she has woken to find her entire world has changed - her house is abandoned and broken, and her neighbourhood is barren and dead. Even stranger is the tattoo on her right wrist that she doesn't remember getting but somehow knows she must cover at any cost. And she's right. When the honeybee population collapsed, a worldwide pandemic occurred and the government tried to bio-engineer a cure. But instead the vaccination turned people into ferocious, deadly beasts. They have been branded as a warning to unvaccinated survivors. Key people needed to rebuild society are protected inside a fortress-like wall. Fiona has awakened branded, alone and on the wrong side of the wall.....

Stung by Bethany Wiggins is an incredibly thrilling dystopian read that had my complete and utter attention from it's opening page and held me ensnared from beginning to end with it's fast paced plot, constant action and swoon-worthy romance!

I have to be honest.....I hadn't heard much about Stung before I received a copy for review. I've never read anything by Brethany Wiggins before now and as far as I was concerned, the cover was cool and the premise looked promising, but I wasn't really sure what to expect. Going into the Stung I had an open mind and an open heart, but not too many expectations. So in saying that, it's suffice to say that Stung blew my mind! Like blew my mind--I loved this book! Love, love, loved it. Adding it to my favourite dystopian reads as we speak!

From the opening chapter of Stung I was hooked. Stung is a quick, short read and was mysterious and riveting. Featuring Fiona, a teenage girl who wakes up in a run down version of her home to discover four years of her life missing and no recollection of how she got that way, Stung is perfectly paced. This is one of those novels where you only know as much as your main character knows, and you, as they, are thrown in the deep end as they navigate a world they really know nothing about.

Despite the mixed reviews I've recently seen for Stung, Stung was exactly what I didn't even know I was looking for when began the book. I'm a fan of fast paced, survival of the fittest, run for your lives kind of dystopians and in this Stung hits the nail on the head. The concept in this book is really striking. In a world where bees are going extinct and taking with them the ability to pollinate plants and flowers and thus fruit and vegetables and food in general, scientists genetically create new bees, only to find that these genetically altered bees spread a flu that puts the entire population at risk. Their solution is to create a vaccine against this flu, only the kids vaccinated begin to slowly go crazy and turn into zombie-like individuals; real "Beasts". Chaos ensues and the world as we know it ends. Excellent idea and completely unique--where Bethany Wiggins came up with that I'll never know!

I found it really easy to like Fiona in this novel. Fo features a childlike quality to her that's quite endearing and her ability to do whatever she has to to survive; shave her head, cover herself in dirt or wade through knee deep feces and sewerage, is admirable. Being in Fiona's head you know only what she does and as she experiences flashbacks and bits of her memory you can begin to understand what happened in the past a bit more.

Forgive me. I may squeal like a schoolgirl when I think of Bowen. And Fo together with Bowen. Some may say their relationship came on fast, but to me it was a delicious undertone to all the action and the running-for-your life aura that radiates from Stung. When Fo first meets Bowen he's not exactly her white knight. I actually liked this aspect of the story. This society is harsh and dangerous, whether it's the Beasts, the militia or the raiders proving to be a danger, and as the novel progresses it becomes quite clear that most people look after number one.

Bowen is a part of the militia; strong and capable and as cruel to Fiona as everyone else in the beginning, but there's an honorable part to him that shines through once he realizes who she is and the fact that she's not a monster. I thought these two were so very sweet. To me, Bowen was sexy as hell, and he and Fo had a great connection. I lived for the romantic moments between these two in the midst of all the fear and desperation and fast pace of the plot and loved watching them interact.

Honestly, I don't think my review really does this book justice--it's just something you need to read. Quick, addictive and riveting, Stung is a page turner! Bethany Wiggins leaves the story at the perfect point and I for one am eagerly awaiting the release of it's sequel!

Source: Sent for review by Bloomsbury Australia (Thank you guys!)
Format: Paperback
Buy it: Bookworld | The Nile | The Book Depository | Amazon
My Recommendation: Dystopian lovers will enjoy this one. Add it to your TBR peeps!
Cover: I think it's simple, but fitting--I like it.
Will I read sequel/continue with series: YES!