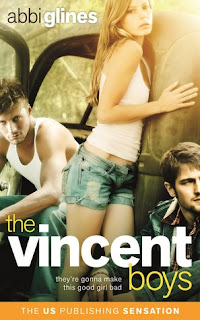 Beau Vincent is rude, bad, and dangerous to know. So, why can’t good girl Ashton Gray keep away from him? She already has the perfect boyfriend – her town’s local Prince Charming, Sawyer Vincent. But Sawyer is away for the summer, and in the meantime Ashton is bored, and the head between her and Beau is undeniable – as well as irresistible. Ashton is about to unleash her bad girl – but what will she do when Sawyer comes home? And how will Sawyer react when he returns to find his girlfriend in the arms of his best friend – and cousin?

The Vincent Boys is a sexy, exciting and enjoyable romp through one steamy Alabama summer.

The Vincent Boys is fun, sexy and more than a little addicting. This is the kind of book you stay up all night reading!

I'm happy to say I was pleasantly surprised with this book. Admittedly, I did have high expectations thanks to all the rave reviews I've heard, but as always I had my doubts. Would it live up to my expectations? Would it be everything I wanted it to be? Would I even like it at all? Well. I did....and then some. In all honestly, The Vincent Boys was basically the perfect book. Romantic and exciting, I only had one issue with it, but I'll get to that a little later......

Having now read The Vincent Boys, it's no surprise to me that Abbi Glines is becoming such an accomplished writer. From self-published to published all around the world, this woman is obviously very talented at writing believable, likeable, yet marginally flawed characters. Abbi Glines's writing is perfect within this story. It isn't over bearing, and the dual POV between main characters Ashton and Beau allow a very well rounded view of the goings on in the story.

At it's base, The Vincent Boys really is a story of forbidden love, but it's actually so much more than that. The characters within the book really are stepping into adulthood and learning who they are, and who they love, along the way. Our main characters Ashton and Beau are very different, but I found I liked them because of this.

I was glad Glines didn't "really" paint Ashton as perfect--rather someone fighting to be perfect. Sure everyone saw her as the perfect preachers daughter, but from the inside of her head you know she's far from this. It made the changes she undertook and the risks she took with Beau believable--this wasn't a girl making out of character decisions, this was a girl finally finding the courage to be herself, no matter what people around her thought.

And as for Beau...whoa boy! Beau was sexy, naughty boy. In the best way. I really felt for Beau in this book. Everyone, bar Ash and Sawyer thought the worst of him. No one treated him well and thought him bad news. They only saw the bad history and the bad upbringing. They didn't see the valuable man he could be at times, or how deeply he cared about Ashton and Sawyer. He may have hurt his "cousin" but he still loved him. His actions may not have seemed to show it, but being inside Beau's mind for half of the book allowed us as the reader to experience that love first hand. Ashton was Beau's world. She was the only one who saw the good in him and who made him feel worthy and I found it so sweet how protective he was of her.

So basically I loved Ashton and I loved Beau....but I didn't love what they did. The romance was hot and addicting in this book--very New Adult, but the thing that kept it really truly being that five out of five book for me was the fact that no matter how much they loved each other, what Ash and Beau did was cheating. And that wasn't right. Was I cheering for them to be together despite their social differences? Yes, how could I not? However, I often struggled with reconciling their relationship with knowing that they were doing was going to hurt people, especially Sawyer. I understand that this aspect was something different Abbi Glines could explore within the book, but it still felt wrong to me. In fact, it took me a while to really get into the book at first due to this very reason, however when I finally put that out of my mind it was easy to become immersed in the story and the romance that was Ashton and Beau's. Regardless of the fact what they were doing was wrong, there was no denying that what they had was special and deep and so so sexy. Ashton especially was experiencing love, and lust, for the first time and it was impossible not to be swept up in that.

I also found I liked the lesser characters as well. Obviously, I'm aware that Sawyer and Lana will be the feature couple in the next book, so I was very aware of them in The Vincent Boys. I like them already--although I don't feel like I know them. Yet. I did like Beau's mum Honey Vincent though. And the friends of Ashton's we met. That weren't cruel to her, I mean. I'm looking forward to seeing more of these characters in the second book!

From beginning to end, The Vincent Boys is all passion and intensity and will often have you wondering how something so wrong can feel so right. Add it to your to-be-read pile folks, this is one NA you don't want to miss!

Source: Sent for review by Hot Key Books (Thank you so much Sandra!!)
Format: Paperback
Buy it: Booktopia | The Nile | The Book Depository | Amazon
Recommendation: I thinks fans of NA will love this new addition to the genre!
Cover: It's likeable--not exactly how I picture Ashton and the boys though.
Will I read sequel/continue with series: Yes! Really looking forward to reading Sawyer and Lana's tale!

Email ThisBlogThis!Share to TwitterShare to FacebookShare to Pinterest
Labels: 4 Star