Book Shelf: Scarlet In The Snow by Sophie Masson 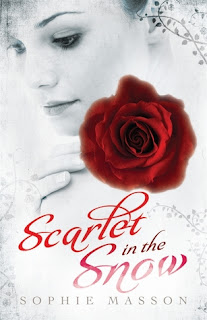 A deserted mansion. Empty picture frames. A perfect red rose in a snowy garden. There is rich and powerful magic here, and a mystery to unravel . . .

When Natasha is forced to take shelter from a sudden, terrible blizzard, she is lucky to see a mansion looming out of the snow. Inside it's beautiful: the fire lit, the table set. But there is no one there. And on the walls, instead of paintings, are empty frames. In the garden, she finds one perfect red rose about to bloom, a vivid splash of scarlet against the snow. Dreamily she reaches out a hand . . . Only to have the master of the house appear - a terrifying, gigantic creature who looks like a cross between a bear and a man - and demand vengeance on her for taking his rose. So begins an extraordinary adventure that will see Natasha plunged deep into the heart of a mystery. She begins to realise she has stumbled onto a great tragedy - a spell of revenge laid on the young man the Beast once was, devised by a powerful sorcerer.

But even if she can break the spell, the Beast she has now come to love will be snatched from her. Natasha will have a long journey, and many ordeals, ahead of her before there can be a happy ending. Inspired by two beautiful Russian fairytales - The Scarlet Flower (the Russian version of Beauty and the Beast) and Fenist the Falcon, Scarlet in the Snow is a beguiling mix of magic, romance, adventure and mystery.

Scarlet in the Snow by Sophie Masson is a very quaint fairytale retelling, woven together beautiful with Russian folk law.

In all honesty, I'm at a mixed mind when it comes to Scarlet in the Snow. I appreciate what author Sophie Masson has done with this book, but I also felt at times the story fell flat. That being said, while Scarlet in the snow wasn't the best fairytale re-telling I've ever read, I did like it--for the most part.

The biggest draw for me concerning this book was that I enjoyed Sophie Masson's writing style and the fact that Scarlet in the Snow continued on long after where I'd expect the traditional Beauty and the Beast story to end (where the the Beauty professes her love and Beast becomes a man once more). Masson's writing painted a lovely picture of the story within my mind; describing the lucious and magical world within the book in a very rich and detailed manner.

The mythology within Scarlet in the Snow was interesting, nothing I'd ever seen before, although I was a tad confused at times and wished the mythology and magic known to the characters was better explained. The characters, including leading lady Natasha, were likeable, but felt bland in terms of personality and chemistry. The romance, and "love" shared by our Beauty and Beast, unfortunatly, to me, seemed to come on too fast and too soon, and in turn never meant much to me. I understood why Natasha risked all she did, but I never felt it......meaning what was on the line didn't mean as much to me as I wanted it to.

That being said, the story, aside from a few moments when I felt it dragged, was nice enough to read about. I liked how well the author tied everything up and how we left the characters. While this will never be something on my faves list, if you're a fan of fairytale retellings and looking for something fairly quick to read, Scarlet and the Snow may just be the book for you!

Source: Sent for review by Random House Australia (Thank you guys!)
Format: Paperback
Buy it: Booktopia | The Book Depository | Amazon
Recommendation: Fans of fairytale re-telling should enjoy.
Cover: I do like the cover--it's quite striking
Will I read sequel/continue with series: No. I appreciated what the author tried to do, but this book just wasn't really for me.