Today the Runes Blog Tour stops at The Rest Is Still Unwritten and I have an exclusive excerpt to share with you as well as an awesome tour wide giveaway! First, let's take a little look at Runes.... 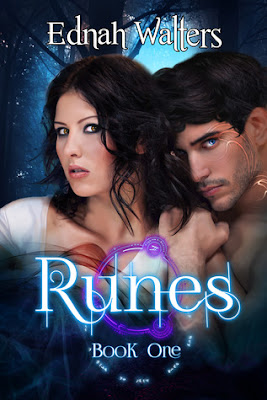 Seventeen-year-old Raine Cooper has enough on her plate dealing with her father’s disappearance, her mother’s erratic behavior and the possibility of her boyfriend relocating. The last thing she needs is Torin St. James—a mysterious new neighbor with a wicked smile and uncanny way of reading her.

Raine is drawn to Torin’s dark sexiness against her better judgment, until he saves her life with weird marks and she realizes he is different. But by healing her, Torin changes something inside Raine. Now she can’t stop thinking about him. Half the time, she’s not sure whether to fall into his arms or run.

Scared, she sets out to find out what Torin is. But the closer she gets to the truth the more she uncovers something sinister about Torin. What Torin is goes back to an ancient mythology and Raine is somehow part of it. Not only is she and her friends in danger, she must choose a side, but the wrong choice will cost Raine her life.

The ding of the doorbell resounded in the house before I finished my assignment. I grinned. Must be Eirik, my unofficial boyfriend. I jumped up, raced to the door, and yanked it open.

“About time you got he…”

I took a step back, my pulse leaping. In one sweeping glance, I took in the stranger’s shaggy black hair, piercing Pacific-blue eyes under arched eyebrows, black leather jacket, and hip-hugging jeans. Either fate had conjured the poster boy of all my fantasies and deposited him on my doorstep or I was dreaming.

I closed my eyes tight and then opened them again.

He was still there, the only thing missing was a bow or a note with my name pinned to his forehead. Irrationally, I wondered how it would feel to run my fingers through his hair. It was luxurious and so long it brushed the collar of his jacket. His lips moved, and I realized he was speaking.

“What?” I asked. The single word came out in two syllables, and I cringed. Lame, Raine.

“I asked if you’d seen Eirik Seville,” the stranger said impatiently in a deep, commanding voice as though he was used to giving orders, “and you shook your head. Does that mean you didn’t understand what I said, don’t know him, or don’t know where he is?”

“He said he would be at the house of...” he pulled out a piece of paper from the back of his biker glove, the fingerless kind, and read, “Raine Cooper.”

“That’s me. Lorraine Cooper, but everyone calls me Raine. You know, rain with a silent E,” I said even though he didn’t ask for an explanation. I tended to blabber when nervous. “Yeah, well, Eirik’s not here.”

“When do you expect him? Or should I ask when does he usually get here, Raine with an E?” the guy asked.

I bristled, not liking his mocking tone or the way he spoke slowly as though I was a dimwit. “He doesn’t always come here after school, you know. You could try his house or text him.”

Mr. Hot-but-arrogant shrugged. “If I wanted to use modern technology I would, but I’d rather not. Could you do me a favor?”

Use modern technology? Which cave did he crawl from? He spoke with a trace of an accent that had a familiar lilt. British or Aussie? I could never tell the difference.

He sighed. “You’re shaking your head again. Did my question confuse you? Am I talking too fast, too slow, or is it me? I’ve been told my presence tends to, uh, throw people off.”

I crossed my arms, lifted my chin, and stared down my nose at him. I was usually the calm one among my friends, the peacemaker, but this guy was seriously pushing my buttons with his arrogance. “No.”

His eyebrows rose and met the lock of hair falling over his forehead. “No to what?”

He rolled his eyes, plucked wraparound sunglasses from the breast pocket of his jacket, and slipped them on before turning to leave.

EDNAH WALTERS grew up reading Nancy Drew and the Hardy Boys and dreaming of one day writing her own stories. She is a stay-at-home mother of five humans and two American short-hair cats (one of which has ADHD) and a husband. When she is not writing, she’s at the gym doing Zumba or doing things with her family, reading, traveling or online chatting with fans.

Ednah is the author of The Guardian Legacy series, a YA fantasy series about children of the fallen angels, who fight demons and protect mankind. AWAKENED, the prequel was released by Pill Hill Press in September 2010 with rave reviews. BETRAYED, book one in the series was released by her new publisher Spencer Hill Press in June 2012 and HUNTED, the third installment, will be released April 2013. She’s working on the next book in the series, FORGOTTEN.

Ednah also writes New Adult paranormal romance. RUNES is the first book in her new series. She is presently working on book 2, IMMORTALS.

Under the pseudonym E. B. Walters, Ednah writes contemporary romance. SLOW BURN, the first contemporary romance with suspense, was released in April 2011. It is the first book in the Fitzgerald family series. Since then she has published four more books in this series. She's presently working on book six. You can visit her online at www.ednahwalters.com or www.ebwalters.com.

a Rafflecopter giveaway
I'd like to thank Giselle of Xpresso Book Tours and Ednah Walters for allowing me to be a part of this tour and say good-luck to everyone who enters the giveaway!