Book Shelf: You Are Mine (Mine, #1) by Janeal Falor 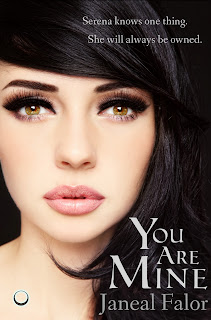 Serena knows a few simple things. She will always be owned by a warlock. She will never have freedom. She will always do what her warlock wishes, regardless of how inane, frivolous, or cruel it is. And if she doesn’t follow the rules, she will be tarnished. Spelled to be bald, inked, and barren for the rest of her life—worth less than the shadow she casts.

Then her ownership is won by a barbarian from another country. With the uncertainty that comes from belonging to a new warlock, Serena questions if being tarnished is really worse than being owned by a barbarian, and tempts fate by breaking the rules. When he looks the other way instead of punishing her, she discovers a new world. The more she ventures into the forbidden, the more she learns of love and a freedom just out of reach. Serena longs for both. But in a society where women are only ever property, hoping for more could be deadly.

You Are Mine is a thrilling debut by author Janeal Falor that had me hooked from the very first page!

Heading into this book I knew one thing....I loved the cover, but I wondered if the book it housed would live up to it's promises? Would it be as good as it sounded? Well, I have to say...it was, and then some! Catching me from the opening chapter, I have to say I was very impressed with this book. I've never read anything exactly like You Are Mine!

To begin with, the story is very well told, perfectly paced and exciting where need be. In all honesty, I very rarely wanted to put this book down and turned pages relentlessly, very much drawn into the story. The characters were very likeable and interesting to read about and I enjoyed figuring out the motivations and intentions of some. I admit there were a few plot developments I did see coming, but that didn't in any way make them less enjoyable to read about. Rather I found the anticipation at times to be too much!

Janeal Falor has created a world really different in You Are Mine, featuring a society where women are not only seen as lower class, but are actually considered nothing but possessions by their "masters". Obviously I've read quite a few books by now where the featured society hold little to no value for women, but there's often some kind of male relative such as a father, grandfather or uncle of our main character that breaks this mold and actually cares This is not the case in You Are Mine and it makes for interesting reading.

I thought all the characters in this story were well rounded and well thought out. From our main character Serena to her sisters, Cynthia and Bethany and her friend Katherine, to Councilor Zade and the quirky Waverly. They all had a fantastic dynamic that leant so much to the story.

I couldn't help but find myself entranced by Serena's plight. As our main character, it's impossible not to feel Serena's repression and fear, having grown up in a world where women are owned by warlocks. This entire story is nothing but a huge journey for her as she learns to trust herself, and more importantly, others. It's all a very big change for Serena as she slowly comes to understand that not every action will result in a punishment. From the very beginning it's evident Serena is a strong young woman, but she's also very nervous and often skittish around others, especially Zade. At times I wished she wouldn't second guess herself so much, but at the same time I understood why she did this. A lifetime of conditioning doesn't change over night, but that's not so say Serena doesn't come a long way over the course of the book.

Personally, I would have liked to deeper explore the society of warlocks that exist in this story, especially those of the Envadi, who proved to be more than they really were. I'd hate to think I'd give too much away, but the friendships that develop between Serena some of the characters in this book, as well as her blossoming "something" with Zade all made me want to keep on reading even when I knew the story was drawing to a close. Serena and Zade have a very nice relationship to read about, one that I felt came a long way over the course of the book, but that didn't progress too swiftly or two suddenly.

The ending races to a stunning climax that changes the very course of the book and rocks the story's society before coming to a swift, albeit great ending that leads to many possibly in the future. Janeal Falor has done a fantastic job blending action, danger and just the tiniest hint of romance in You Are Mine, guaranteeing that I'll be on the look out for a sequel somewhere in the future. With a great story, great characters and a great overall feeling, You Are Mine certainly left me wanting more!

Source: Sent for review from by the author (Thank you Janeal!)
Format: Kindle Ebook
Buy it:  Amazon (Kindle) | Amazon (Paperback) | Smashwords
Recommendation: Fans of fantasy will love this--think Maria V. Snyder
Cover: Incredible! Simply incredible! This cover is so incredibly stunning.
Will I read sequel/continue with series: If Janeal Falor writes a sequel I will absolutely read it.....


Want to read You Are Mine? Head on over to my giveaway to win yourself a copy!