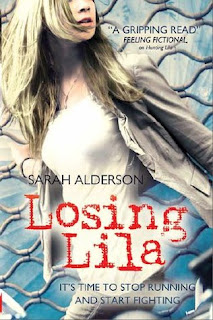 Alex and Lila are on the run, desperately trying to stay one step ahead of the Unit, which is somehow tracking their every move. While Alex is determined to keep Lila safe and her ability secret at any cost, Lila's only thought is of finding a way back to California so she can rescue her brother and mother from the military base where they're being held. Struggling to control both her growing power and her deepening feelings for Alex, Lila decides the time has finally come to stop running and start fighting.

Together with Alex, Demos, and the others she's come to think of as family, Lila plans not only to save her brother and mum, but also to completely destroy the Unit and everything it stands for. But the plan requires Lila to return to California alone, and to make friends with the enemy - and in doing so, she risks losing everything: Alex, her family… even her life.

My goodness do I love Sarah Alderson! Quickly becoming on of my favourite authors, there’s yet to be one of her books that I haven’t adored and Losing Lila is no exception. Written superbly, Losing Lila is heart pounding from the very first chapter. Continuing on with the storyline from the first book, Alderson once more expands on her world with shocking secrets and unexpected revelations.

I must admit I didn’t love this one as much as the first book, Hunting Lila but as far as sequel’s go this was a solid follow up. It didn’t read like a “filler” sequel either as so many seem to be nowadays, rather it has its own interesting storyline and purpose in the overall series that drove the book.

All the characters we loved from the first book are back together again to continue their fight against the Unit and the shady Sterling Enterprises once again. Though I won’t say what it is they join up again to do for fear of giving away spoilers, I will admit that Lila and her family are front and centre, with many revelations coming to light that I simply didn’t expect.

I thoroughly enjoy Anderson’s storytelling. Losing Lila was such a thrilling read. There’s never a dull moment in this book with so much going on and so much excitement happening. The action is heavy and the relationships between the characters form the perfect balance between non-stop action and high stakes danger with romance and emotion.

As with the first novel, Lila is still a wonderful heroine to read about; one who’s learning more about herself and who she is in Losing Lila. It was really lovely to see Lila really begin to accept herself in this book as well as embrace what she can do. As her abilities grow and she begins embrace her part in Demos little group, Lila is becoming a stronger person. Obviously past events have had an impact, but the woman she’s growing into is one I certainly love.

Alex is still his usual sexy self, stealing any scenes he’s in and winning my heart more and more. It was interesting seeing the tables turn for Alex a bit in Losing Lila and see him doubt himself. As someone always so sure and capable, it was nice seeing Alex appear vulnerable; even if he was questioning whether Lila needed him or not.

While the romance between Lila and Alex isn’t as intense this time around, nor is it as front and centre, the connection and spark between them continues to heat up the pages with their chemistry still blazing full force. One of the things that makes their relationship so strong for me is how rooted in the past it is. Having known each other since they were children, they’ve shared so many moments together and as Alex and Lila look back at these a couple of times during the book, you can’t deny the closeness between them that has always been there---I love that!

Exciting from beginning til end, I really didn’t want Losing Lilato finish. As I raced through it, unable to put it down, it became clear that Sarah Alderson had penned another winner here and I personally wait for more from this series! This is one you won’t want to miss!

Source: Sent for review by Simon & Schuster Australia. (Thank you Caroline!)
Format: Paperback.
AU Release Date: Available now!
Buy it: Booktopia // The Nile // The Book Depository
Recommendation: This is one series that is a MUST READ. Love X-Men? Then you'll love this!
Cover: I don't love it as much as I did the first, but it's still an excellent cover.
Will I read sequel/continue with series: YES! Without a doubt!