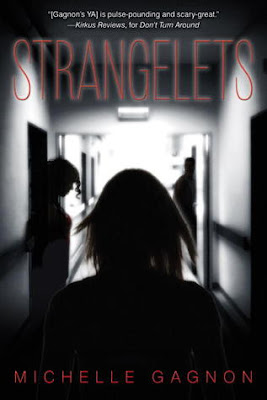 Strangelets by Michelle Gagnon
Releases on: April 9th 2013.
Add it on Goodreads!

On a day like any other, six smarter-than-most teens wake up in the same hospital after having experienced a traumatic event that they can't quite remember ... other than being forcibly sucked into an abyss at the moment of their deaths. Somebody or something seems to be pulling the strings. With individual clocks ticking─and with each guarding an individual secret─they band together and conspire to piece together the whole of what happened.

Soon they discover that they've been trapped in a future that isn't of their making: a deadly, desolate world at once entirely familiar and utterly strange. Only one of them holds the key to getting them home. But which one, and why? As the truth is revealed through the eyes of its three key players, the reader is taken on a dark journey into both the hearts of teens who must do anything to survive, and into the heart of a parent who will do anything to protect his child.

Thoughts:
Am I the only one who this Strangelets sounds absolutely awesome?!? No. Good, because, how....freaking....amazing....does....this....book.....sound? Six teens waking up in a hospital with no memory of the event that led them there? Secrets, the future and teens who have to do anything to survive? Um, yes please!


What do you think of Strangelets? Are you adding it to your TBR list?
And, what are YOU waiting on this week!