Welcome to the cover reveal for Dead Harvest by Jeanette Battista and Tracey Phillips thanks to Supagurl Book Tours!

I will be taking part in the blog tour for Dead Harvest in early January but for now I'm able to share with you the killer cover. So without further ado, I give you...... 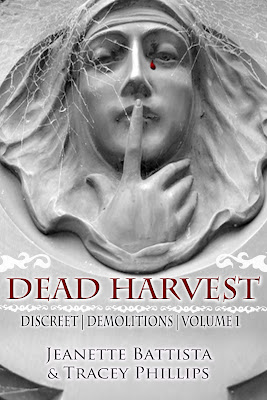 Someone’s been raising the dead and it’s J’s job to find out who. As a detective operating in the Underworld, J—with her powers of shadow manipulation—is uniquely equipped for the job. What she isn't counting on is the help of an escapee from a mental institution who seems to attract trouble just by existing.

It’s up to J and T—two very unlikely allies—to find the necromancer and bring him before the Underworld Balance Magistrate for judgment before the human world gets wise to the dead walking among them.

Dead Harvest will be available from November 13th!

About the Authors:
Jeanette Battista graduated with an English degree with a concentration in medieval literature which explains her possibly unhealthy fixation on edged weapons and cathedral architecture. She spent a summer in England and Scotland studying the historical King Arthur, which did nothing to curb her obsession. To satisfy her adrenaline cravings—since sword fighting is not widely accepted in these modern times—she rode a motorcycle at ridiculously high speeds, got some tattoos, and took kickboxing and boxing classes. She gave up the bike when her daughter came along, although she still gets pummeled at the gym on a regular basis.

Tracey Phillips is a science writer by day and gamer by night. She’s worked in a tea factory, dropped creamed spinach on a four star General, wrangled the prose of college freshmen, and stage-managed more amateur theatrical productions than you can shake a stick at. Her random and misspent youth also included a yearlong sojourn in Scotland that left her with a strange fondness for daffodils and fife and drum music. She lives in North Carolina with her husband, two children, every video game console known to man, and an extremely low-maintenance cat.

Don't you just love that cover? There's just something about it--it's simple, but mesmerising. I'm actually really looking forward to reading this book. Sounds interesting and I have to thank Heather of Supagurl Book Tours as well as authors Jeanette Battista and Tracey Phillips for allowing me to be a part of the cover reveal!