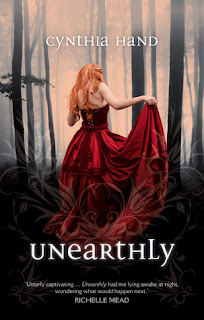 Clara Gardner has recently learned that she's part angel. Having angel blood run through her veins not only makes her smarter, stronger, and faster than humans (a word, she realizes, that no longer applies to her), but it means she has a purpose, something she was put on this earth to do. Figuring out what that is, though, isn't easy.

Her visions of a raging forest fire and an alluring stranger lead her to a new school in a new town. When she meets Christian, who turns out to be the boy of her dreams (literally), everything seems to fall into place—and out of place at the same time. Because there's another guy, Tucker, who appeals to Clara's less angelic side.

As Clara tries to find her way in a world she no longer understands, she encounters unseen dangers and choices she never thought she'd have to make—between honesty and deceit, love and duty, good and evil. When the fire from her vision finally ignites, will Clara be ready to face her destiny?

Unearthly is a moving tale of love and fate, and the struggle between following the rules and following your heart.

Unearthly, Cynthia Hand’s debut novel is a spell-binding tale of beauty and wonder that will captivate you and take your breath away!

I’ve heard a lot of things about Unearthly, both positive and negative, so when I picked it up I initially planned to only read a couple of chapters, you know, to get a feel of it. Fast forward the rest of the day and I’m finished and wondering when I can get my hands on the next book! It’s taken me a while to actually pick this book up (and I’m truly wondering why right now) but Unearthly is without a doubt one of the best angel tales I’ve ever read!
Cynthia Hand has written a complete gem here, full of incredible angel lore and mystery and chock-full of amazing characters that you can’t help but adore. She writes beautifully, the words a perfect companion to the story she weaves together. Hands words flow together stunningly to paint a picture of the vast mountain setting that houses Unearthly and to bring the story to life.

There’s such an aura of mystery surrounding this book as Clara begins her search to fulfil her “purpose”. Having found out she’s a part angel only a few months before, Clara soon finds herself packing up and moving with her family in search of the mysterious boy that haunts her dreams and is essentially her mission. I was captivated the entire time I was reading. From the very moment I picked up the book I found it near impossible to put it down as I had to know what would happen to Clara next.

Every single one of the characters within this book are well rounded and well throughout out. Hand's characterisation is impeccable, from our leading lady Clara, to our love interests, family and friendships that develop throughout the book. They’re all such wonderful editions to the story. One shining aspect of this book for me (besides the obvious love interest) is the fantastic relationship Clara has with her family. The bond she shares with both her mother Maggie and brother Jeffery constantly caught me. There’s a true sense of realness to it with the constant sibling banter and natural interactions and the mother and daughter relationship that, however strained it becomes at times due to some certain choices Clara makes, never seems to waver. And of course fantastic friendships Clara forms with the very different, however equally awesome, Wendy and Angela. Every character in this book shone and there wasn’t a single one I didn’t like.

Clara is one of the best heroines I’ve read about in recent fiction. She didn’t hold a lot of those character traits you seem to find in the martyr heroines that litter YA fiction and she actually had a back bone, while still begin very believable and emphasisable as a character. Despite begin half angel, Clara is very much a normal teenager. She experiences the same things everyone else does. She has insecurities and fears, and faced some tough choices throughout this book that saw her decide between love and destiny.

There’s a lot of speculation about the two male leads within the story and their relationships with Clara and while I adored one, I found it hard to like the other.
To begin with Tucker is simply amazing. Pure amazing, with a capital A! Hand certainly has me whistling country songs and considering visiting a rodeo with this sexy cowboy. Despite being Clara’s friend Wendy’s twin brother, Tucker and Clara didn’t exactly have an easy relationship form the beginning. He teased her, she sputtered and despised him and all along you knew (hoped) it was going to lead to one thing....luuurve! I really dug the way Hand has played their relationship. For the beginning of the novel I really wished Clara would stop gawking over Christian so much, and when she finally stopped and began to take notice of Tucker, Hand took their new friendship a tad further into a romance that I found to be endearingly sweet and incredible real at the same time.

As for Christian, well I’m not quite sure how I feel about him. Now, I know he’s the golden boy; the ever popular, overall nice guy that Clara is expected to save, but for some reason I just don’t like him. And I don’t exactly know why. Towards the end of this book we learned some startling things about Christian, and I know those revelations are going to have an impact on future storylines, but there’s something I can’t put my finger on about Christian that I dislike. Perhaps it’s because Hand has hinted that she may play with the lingering emotions and relationship between Clara and Christian in the next book and I’m definitely a Tucker girl, I’m not quite sure.

The ending is very much a shock to the system and not one that I saw coming. It proves to be an interesting progression to the story and I’m certainly dying to see what it all means. Personally, I believe Hand has a lot up her sleeve. While her world wasn’t overly elaborated on it Unearthly I can see her expanding on it and building on it in the next book and I cannot wait to get my greedy little hands on it!