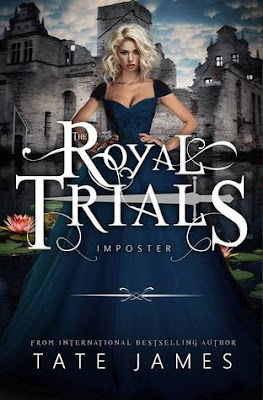 It should have been an easy task, for a skilled mercenary like Rybet Waise. Simply break into the royal palace, and rescue her friend from the executioner's block. But when Rybet accidentally qualifies for the Trials, she finds herself with little choice but to see them through.

A thin veil of etiquette, elegance and glamour hides the true nature of the Trials. Behind closed doors, they are brutal and bloody, and to fail means to forfeit her life.

Thrust into the limelight and forced to compete with the Kingdom's elite sweethearts, unlikely allies emerge and bonds are formed. But someone will stop at nothing to see her fail.

After all, she's nothing but a dirty pond-dweller.

Rybet will do whatever it takes to survive until the Golden Ball, Princes be damned.

Imposter is the first novel in the Royal Trials series by Tate James and is an entrancing reverse harem fantasy with a kick-ass heroine, plenty of excitement and sizzling romantic chemistry.

Rybet Waise is a pond-dweller, surviving in the water infested slums of the Kingdom of Teich. A mercenary working for a crime lord, everything goes to hell when Rybet’s friend is caught by palace guards during a heist and scheduled to face the executioners block. Determined to save her friend, Rybet breaks into the palace but the rescue attempt goes wrong, with Rybet accidentally qualifying for the Trials. A series of tests, the Trials sees a small group of select young women compete to potentially win the hand of one of the three royal princes. Rybet wants nothing to do with the young men whose hearts she should want to win, but when it becomes clear the Trials are far from the tests of etiquette and elegance they are promoted to be, Rybet will need to find a way to outlast the bloody and brutal testing if she hopes to survive.

Here’s the thing about me; I like fidelity. I like mahogany. I don’t like romantic confliction and I HATE love triangles. So reverse harems are not normally my thing. I don’t like seeing my heroines involved with multiple men at the same time nor do I enjoy seeing the struggle being involved with multiple men has one her feelings and desires. I like things straightforward; one guy, one girl committed to each other. BUT boy did I ever love Imposter!

Tate James has been given the honour of writing the first reverse harem that I not only finished but absolutely adored. Introducing readers to a mysterious world that has a lot of potential and possibility, Tate James creates a storyline of court politics and deception where not everything is as it seems and one capable and tenacious heroine must manage to survive when the only options are death and becoming a prince’s bride; all while she attempts to navigate her developing and equally as strong as each other desires for three enigmatic and delectable men.

Imposter is told through the eyes of eighteen year old Rybet, someone who I really did like. Despite being in an imaginable position, Rybet adjusts really well, all things considered. Not having lived a life of luxury like the other competitors, Rybet has an edge that coupled with her intelligence and determination made her a force to be reckoned with. There was obviously areas where she struggled, but she still tried, in her own way, even if her mouth tended to get the better of her where authorities were concerned.

I think the reason I enjoyed this novel so much despite the reverse harem aspect not normally being up my alley was that Tate James really paces the relationships between Rybet and her three strapping men. The physicality of each relationships builds slowly and isn’t too sexually charged; just the perfect amount of attraction and desires sizzling between them all. All three men in question are so different but oh, so appealing. I was eager to devour each of the interactions they had with Rybet as they were sharp, biting exchanges with fantastic dialogue and sexual tension. I personally don’t think I could choose between them myself and am actually glad in this instance that Rybet doesn’t plan, or have, to.

In the heart of The Selection with a slightly sexier twist, Imposter was a great kick-start to the Royal Trials series. Tate James had me hooked from beginning to end and as she concludes Imposter on a cliffhanger, I for one am absolutely dying for the second novel, Seeker to come out so that I can read the next chapter of Rybet’s journey straight away!