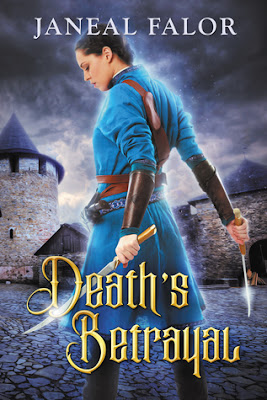 Ryn finally has a name, and a chance at life now that Daros has been taken to the dungeons. Or at least she did until he escaped. Not knowing whether to be scared or filled with rage, Ryn sets her guards out to find him.

As much as she wants to help, Ryn must be the Queen her people needs. Or try to be. There's much she needs to do, but she sees Daros everywhere, hunting her. No one can seem to catch Daros, despite her spotting him, and his ruthlessness knows no bounds. When the unthinkable happens, Ryn must face her fears or lose all she's gained.

Death’s Betrayal is the brilliant sequel in Janeal Falor’s Death Queen series and is another action packed and fast paced tale that as easily as good as, if not better, than is predecessor and will sweep readers up into a dangerous world of danger, politics and betrayal.

Now with a name of her own, Queen Ryn is determined to do the best for her people and bring peace and happiness to her kingdom. Yet doing what no queen that came before her has been able to do is difficult, with Ryn’s past a dangerous cloud hanging over the her head and various factions determined to disrupt her rule. When Ryn’s former mentor Daros escapes the dungeons and someone close to Ryn is kidnapped, making choices that best serve her people becomes harder than ever before as Ryn’s heart and desires war with what is expected of her. With dangers mounting and lives on the line, will Ryn be able to face her fears and do what needs to be done? Or will putting herself and her desires cost her everything she holds dear?

As far as sequel’s go, Death’s Betrayal is pretty darn solid. Janeal Falor continues the series with the same excitement, danger and hint of romance that encompassed the first book and made it such as thrilling fantasy. Death’s Betrayal details the next chapter in Ryn’s life as she is now queen and looking to make changes in her kingdom. As always, there are those who oppose our strong willed and capable heroine, but Ryn does things her way; making both friends and enemies along the way.

Ryn continues to be a stellar main character to follow. She’s kind at her very base and wants to make things better for those with little within the kingdom, but she’s also daring, capable and headstrong. Ryn doesn’t want to cower behind guards; she wants to be on the frontline, protecting herself and those around her. It’s nice seeing the growth in Ryn as she begins to let people in and make connections with those around her in Death’s Betrayal. There are a few people she’s letting in including her servant Inkga and her hand-maiden Jem, though the biggest influence and most important individual to her is her Head Advisor and confidant Nash.

Nash is someone you can’t help but like and I do really like his place within the story. The relationship between Nash and Ryn is a lovely undercurrent to a fast paced and forward moving story that is filled with plenty of action. Ryn and Nash are so endearing and I’m enjoying reading about the romance between them, especially with the aspect of forbidden that coats their relationship. Stolen glances, stolen touches, stolen kisses—they're all so enticing and Falor has me eagerly reading for another heated moment between them with the turn of every page.

Exciting from beginning to end, Death’s Betrayal races towards an extremely riveting last few chapters with plenty of twists and turns. Janeal Falor continues to detail a thrilling fantasy series and leaves me dying to see what happens to Ryn and Nash next!