Book Shelf: The Curse (The Butterfly Effect #2) by Margaret McHeyzer 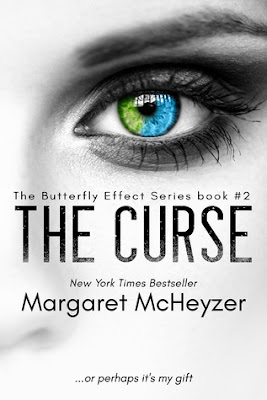 It's been the butterfly effect.
I changed the course of my life because I warned a man.
I thought what I had was a gift, but it's quickly turning into my curse.

Now I realize I'm much more than a girl with an ability.
Because now... I'm becoming a weapon.

The Curse by Margaret McHeyzer is the sequel and conclusion to The Butterfly Effect series and is a fast paced and action-packed follow-up to the first novel.

Ever since seventeen year old Alexa Murphy work up from a routine operation with a strange new ability to foresee someone’s future, she has found herself the target of various individuals determined to use her ability to further their own agendas. Lexi is sick of being kidnapped and held prisoner by someone who wants to take advantage of her visions, but when she’s taken by the most dangerous threat yet, lives are on the line and Lexi and Jude will have to make their final stand if they hope to outsmart those who will stop at nothing to keep Lexi in their clutches…..

Personally, I found The Curse to be a decent follow up to the first novel, The Gift. Picking up where the first book left off, The Curse begins with Lexi held hostage by a brutal and violent individual who won’t hesitate to kill in order to force Lexi to adhere to his whims. With Margaret McHeyzer exploring other aspects of the world she has created within this series in The Curse including those responsible for the creation of Lexi’s new gifts, The Curse is darker and grittier than the first novel.

There’s a lot of things happening during this novel, and with The Curse taking place over a number of weeks and even months, there’s a lot that heroine Lexi goes through. No one is safe and there are losses of life that bring Lexi to her knees and betrayals that change everything. The Curse is very fast paced, and there’s a lot of action and danger in the story to entertain the reader.

Lexi and Jude continue to have a complex relationship with Jude’s role varying between between kidnapper and savior. There’s no denying that his concern for Lexi seems genuine but upon occasion I struggled to reconcile why he felt that way and Lexi’s Stockholm-Syndrome like feelings for Jude didn’t always sit right with me.

Overall though, I did enjoy reading this series. Both novels were quick, effective reads and featured enough excitement and action to keep me entertained.

Source: Sent for review by Give Me Books and the author (Thank you ladies!)
Publisher: Independently published by author
Format: Kindle ebook
Release Date: August 20th 2017
Purchase: Amazon US | Amazon  UK| Amazon AU | Barnes & Noble | Kobo | iBooks | Smashwords
Final Thoughts: Though there were a few parts of this series where I wasn't as invested as I wished I could be, it was definitely worth a read.

Email ThisBlogThis!Share to TwitterShare to FacebookShare to Pinterest
Labels: 3 Star, Book Shelf, Give Me Books