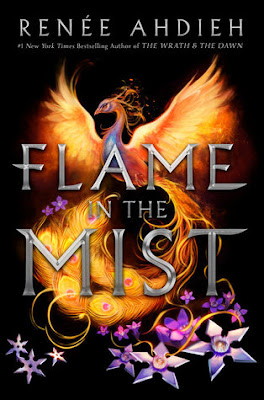 The only daughter of a prominent samurai, Mariko has always known she’d been raised for one purpose and one purpose only: to marry. Never mind her cunning, which rivals that of her twin brother, Kenshin, or her skills as an accomplished alchemist. Since Mariko was not born a boy, her fate was sealed the moment she drew her first breath.

So, at just seventeen years old, Mariko is sent to the imperial palace to meet her betrothed, a man she did not choose, for the very first time. But the journey is cut short when Mariko’s convoy is viciously attacked by the Black Clan, a dangerous group of bandits who’ve been hired to kill Mariko before she reaches the palace.

The lone survivor, Mariko narrowly escapes to the woods, where she plots her revenge. Dressed as a peasant boy, she sets out to infiltrate the Black Clan and hunt down those responsible for the target on her back. Once she’s within their ranks, though, Mariko finds for the first time she’s appreciated for her intellect and abilities. She even finds herself falling in love—a love that will force her to question everything she’s ever known about her family, her purpose, and her deepest desires.

Flame in the Mist is Reneé Ahdieh’s latest novel and is a lusciously vivid and rich fantasy tale set in feudal Japan that sweeps its reader into a story of magic, adventure and unexpected discoveries.

The daughter of a prominent samurai, Mariko is on her way to the imperial palace to meet her betrothed—the Emperors second son--when her convoy is set upon by a group of bandits and she barely escapes with her life. The sole survivor of the violent attack, Mariko thirsts for revenge and the opportunity to prove to her family that she is more than just a bride to be sold. Intelligent and cunning, Mariko disguises herself as a boy and sets out to infiltrate the group who attacked her convoy, an infamous group known as the Black Clan. Whispers and stories of the Black Clan paint a brutal, cruel band of thieves, but as Mariko slips between their ranks, she begins to see another side to the feared traitors. Torn between what she knows and her heart, Mariko finds herself delving deeper into the Black Clan, but as she begins to fall in love with a boy as deadly as a wolf and mysterious as they come, will Mariko be able to achieve what she set out to do? Or will the truth change everything she thought she knew?

Initially Flame in the Mist wasn’t an easy novel for me to sink my teeth into. Thrust straight into Mariko’s story, I found it hard to connect in the beginning but after the first few chapters I found myself effortlessly slipping into the story as I began to fall in love with the characters and their fire. Paying homage to the classic tale of Mulan, Reneé Ahdieh weaves classical Japanese history with magic and enticing character relationships to create a tale that had me eagerly reading along and keen to see what comes next.

Similar to Mulan, Flame in the Mist’s heroine Mariko disguises herself as a boy—only in this tale it’s a band of thieves she infiltrates, not an army. There was something so addictive in watching Mariko become a part of the Black Clan. Pampered and privileged, Mariko hasn’t had to work a hard day in her life, but even tempered, clever and cunning, she quickly takes to life within the Clan, refusing to let those who would see her fail get her down. I liked Mariko. She was actually kind and I thought Ahdieh wrote her well. She very much fills her role in the story.

And many of the other characters were very beguiling too, including the devilish and cheeky members of the Black Clan and Mariko’s twin brother Kenshin. Ranmaru, Yoshi Ren and of course the most important of them all, the mysterious but swoon-worthy Okami all won me over and I adored the different dynamics they all had together. They brought such life and fire to the story; I loved that.

Reneé Ahdieh writes an effortless romance within the story that while electric and burning, doesn’t take anything away from the other aspects of the story. I still found myself completely bewitched however by the growing relationship that I just knew was heading in the direction it was. Flame in the Mist features some intriguing mythology and hints of magic too that I’m hoping Ahdieh explores further in the next novel. It was just enough to entice you and make you intrigued without explaining too much.

Mysterious, magical and entertaining, Flame in the Mist is full of adventure, development and budding betrayals. There is something sinister going on within the royal family and with Reneé Ahdieh setting things up to completely bewitch her reader, I for one am highly anticipating the release of the next novel so I can join Mariko once more after the climactic ending of this wonderful fantasy tale!

Source: Sent for review by publisher via Netgalley (Thank you guys!)
Publisher: Hodder & Stoughton
Format: Kindle ebook via Netgalley
Release Date: May 16th 2017
Purchase: Bookworld | Booktopia | The Book Depository | Amazon
Final Thoughts: I ended up REALLY enjoying this book and am so excited for more. Can't wait for the next book!