Book Shelf: The Gift (The Butterfly Effect #1) by Margaret McHeyzer 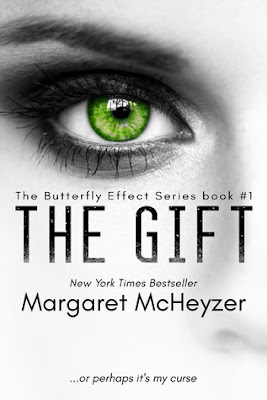 
The Gift is Margaret McHeyzer's latest release and is a paranormal YA that will mystify readers until the very end.

Seventeen year old Alexa was a normal teenager until she has surgery for a burst appendix and awakens with an ability to touch a person and see their future. Scared and struggling to understand her new gift, Lexi makes the choice to save the life of a dark and mysterious young man by telling him of his future unaware that the choice to do so will see her kidnapped and held hostage in exchange for the lives of the ones she loves.

Admittedly this is the first novel by Margaret McHeyzer that I have read as I was intrigued by the description and the stunning cover. I'm also still a big fan of YA with a supernatural element so I knew I had to read The Gift as soon as I saw it. Overall I found it to be a quick and easy read that intrigued me enough and kept me eagerly following along to see what would happen to Lexi next.

That being said, I wasn't as hooked by this book as I anticipated. Though I quite liked Lexi and thought she had fire, spunk and sass while also being a normal teenager, I'm not sure how to wrap my head around Jude. He was contradictory at times and considering the ease at which he became violent, lost his temper and  hurt people, the way in which he treated Lexi on occasion was at odds with the stone cold indifference and brutality he often displayed.

The Gift was well written, paced and full of suspense. Margaret McHeyzer has aroused my curiosity and left me wondering what happens to Lexi next.

Source: Sent for review by Give Me Books and the author (Thank you guys!)
Publisher: Published by Margaret McHeyzer
Format: Kindle ebook
Release Date: July 23rd 2017
Purchase: Amazon US | Amazon UK | Amazon CA | Amazon AU | Barnes & Noble | Kobo | iBooks | Smashwords
Final Thoughts: Overall The Gift was an interesting read and I'll definitely be keeping my eye out for it's sequel, The Curse.

Email ThisBlogThis!Share to TwitterShare to FacebookShare to Pinterest
Labels: 3 Star, Book Shelf, Give Me Books