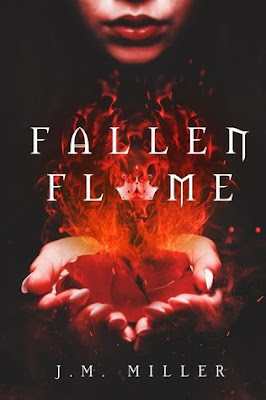 Nineteen years ago, on the island kingdom of Garlin, a girl was born. With charred skin as rough as rock, Vala was instantly feared. For how could one be scorched by magic when it had perished ages before?

Recognizing an asset, the royal family welcomed her on their Guard. Her detail: the prince. To watch. To protect. She has grown with him, lives her life for him.

When the high kingdom’s princess comes to assess the prince, assassins of rival courtiers come to claim his life. One nearly succeeds in his mission. But with shadowy movements and charred skin like her own, Vala knows he is not like the rest.

As threats to the prince continue and questions about Vala’s life begin to rise, she faces a fear worse than fire or water, worse even than losing him.

She fears finding out who she truly is.

Nighteen year old Vala is a member of the Guard, tasked with protecting the prince of Garlin above all costs. Discovered alone as a baby, Vala is somewhat feared and ostracised for her mysteriously charred skin that is as rough as rock and burns like flame. No one knows her origins, but having grown with the prince, Vala wants nothing more than to protect Caulden, someone she cares for deeply. When the princess and queen of a neighbouring kingdom arrive in Garlin to explore the possibility of a political marriage, everything changes. An attempted assassination of the prince is only the beginning of a series of bizarre and mysterious events. The arrival of an enigmatic and determined stranger who may hold the key to Vala’s history and who seems to share the same afflictions as her may give Vala the chance to find out who she is. Yet with sinister forces working their way through the palace and with motives far from clear, will Vala be able to protect those she’s loyal to? Or will betrayal come in a form closer to home?

You know what? I was really impressed with Fallen Flame. It was a solidly written novel, cleverly paced and depicted with some unique and unseen mythology that has a lot of promise. Mixing together some wonderful fantasy elements, author J.M. Miller creates a very vivid and intriguing storyline that was highly entertaining.

Main character Vala is likeable and genuine and someone you honestly enjoy following. She has interesting relationships with those around her and I was very intrigued to see exactly what Vala is; something Miller holds tightly to the chest until the end of the novel. I give props to J.M. Miller for thinking outside the box and look forward to seeing her explore Vala’s abilities and heritage further.

Throughout the story there is action, excitement and even the smallest hint at romance thrown in, although the romance is at the very bare minimum and barely even worth mentioning. I think it’s more likely Miller will develop this down the track, but the hints are there for her to explore in the future, something I would be keen for.

A refreshing fantasy tale, Fallen Flame was a surprising and highly enjoyable story that J.M. Miller that leaves me ready and willing to read more and discover what happens next!

Source: Sent for review by via Netgalley (Thank you guys!)
Publisher: Independently published
Format: Kindle ebook via Netgalley
Release Date: June 19th 2017
Purchase: Amazon | Barnes & Noble | Kobo
Final Thoughts: I was very impressed with this novel and can't wait for the next novel!