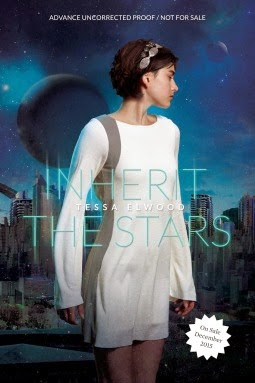 Inherit the Stars by Tessa Elwood
Releases on: December 8th 2015
Add on Goodreads!
Three royal houses ruling three interplanetary systems are on the brink of collapse, and they must either ally together or tear each other apart in order for their people to survive.

Asa is the youngest daughter of the house of Fane, which has been fighting a devastating food and energy crisis for far too long. She thinks she can save her family’s livelihood by posing as her oldest sister in an arranged marriage with Eagle, the heir to the throne of the house of Westlet. The appearance of her mother, a traitor who defected to the house of Galton, adds fuel to the fire, while Asa also tries to save her sister Wren's life . . . possibly from the hands of their own father.

But as Asa and Eagle forge a genuine bond, will secrets from the past and the urgent needs of their people in the present keep them divided?

Author Tessa Elwood's debut series is an epic romance at heart, set against a mine field of political machinations, space adventure, and deep-seeded family loyalties.
Thoughts:
I've read a few YA sci-fi novels lately that I've been a real fan of, and this one looks like it could be my next fave. Not only did the cover catch my attention straight away, but the description sounds like something I'd love!


What are your thoughts on Inherit the Stars? Is it something you would want to read?