I read and reviewed Emily Wibberley's debut novel Sacrificed earlier this year and I'm excited to be participating in the cover reveal for the sequel Forsworn! I'm SO excited for Forsworn and absolutely love the cover. It's seriously kick ass! What do you think? 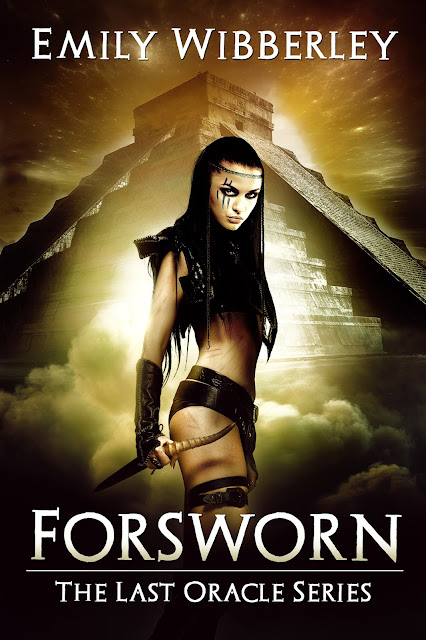 The highly anticipated sequel to the award-winning novel Sacrificed (The Last Oracle, Book 1) heralded as a “Must-Read Romantic Fantasy” by USAToday.com


The hallways had never felt so small before, never so stifling. Clio could hardly catch her breath as she sped down the corridors toward Riece’s old chambers.
She needed to find out what the symbol meant. She had no choice but to go to Riece. She would just have to keep her feelings out of it.
Before she could argue herself out of her thin conclusions, she found herself standing at Riece’s door. She knocked once, quietly, almost hoping Riece wouldn’t hear, wouldn’t invite her in.
“Come in,” he said almost distractedly from within.
She stepped inside and found him seated on a small bench, sharpening the edge of a small dagger. His cloak lay folded at his side, and his chest was left bare except for the smudged lines of his warrior ink. Happily, there was no sign that the princess was around. Perhaps Clio had imagined everything between them.
“Of course. It’s you,” Riece said without glancing at her. “You changed your hair.” He put aside his dagger and looked up at her. “Black. It seems like every time I see you, it’s a different color. Fitting, I suppose. Goes with your capricious nature.”
“Capricious? That’s a pretty big word for you, Commander. You sure you know what it means?”
He laughed bitterly, and for some reason Clio felt the familiar itch in her skin that could only ever be soothed with a fight.
He was suddenly serious. “It means ever-changing. Isn’t that why you haven’t wed the king? Has he, too, grown tired of your fickle heart?” His eyes mirrored the hate in his tone.
He had never looked at her with such antipathy before, and Clio’s blood flooded her cheeks. “Of course not,” she snapped.
“No?” He rose and advanced toward her. “Then you’ve some other reason?”
He was far too close, and Clio was having trouble thinking straight.
“We’ve been at war, hardly the time for nuptials. And—” she stammered. This close, she could tell that Riece was much larger than he had been a year ago. The muscles in his shoulders shifted and bulged with the slightest movement of his neck.
“And?” he prompted.
“And someone had to defend this city after you took your army, to what? Rescue some princess?” She spat the words at him.
Riece’s eyes sparkled with silent laughter. “So that’s the reason for this delightful visit. You’re jealous. Well, you have no right to be.”
“I’m not jealous,” Clio protested.
“No? Because my remembering of this,” he gestured to the two of them, “was that you used me so you could get back to your beloved king. You made your true feelings perfectly clear.” His look had darkened, and his jaw tightened with restrained fury.
She would have preferred a slap to the way he was looking at her. “You’re right,” she admitted.
Riece’s gaze bored into her, but what he looked to find, she couldn’t say.
“Why are you really here, Clio?” he finally sighed, exasperated.
To tell you that I’ve dreamt about you every night for a year, she wanted to scream. “I need you to look at something.”
“Ordering me around so soon?” His lips quirked up in a grin that didn’t travel to his eyes. 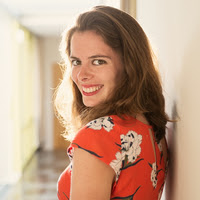 Emily Wibberley grew up in the South Bay where she spent her formative years battling zombies on her Xbox, watching Buffy the Vampire Slayer, and voraciously reading everything from The Hunger Games to Jane Austen, where her love for feisty young heroines was born.

When she isn't reading the latest YA book, she enjoys watching kick-butt action movies with her two rescue German Shepherds, Hudson and Bishop, named after characters from James Cameron's Aliens.

I'd like to take this time to congratulate Emily, not only on Forsworn upcoming release, but on the well deserved success she is having with Sacrificed. Sacrificed is a great addition to the fantasy genre and I no doubt Forsworn will be as amazing as it's predecessor!