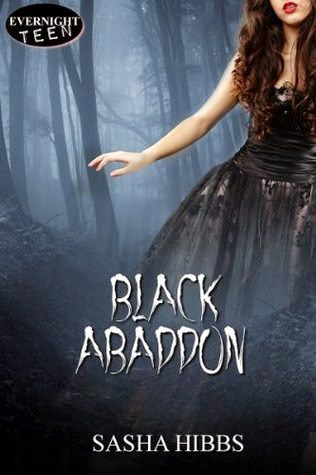 Ally Watson struggles to live with the choices she made, the worst of which resulted in her soul mate's death. Michael’s sacrifice to save the girl he loved may have reversed the Apocalypse, but not the permanent damage inflicted by living with his loss.

Ally begins a journey where she soon discovers that death is not always the end, but sometimes the very beginning. With old friends, she journeys to the Nosferatu Nation where she meets with new alliances willing to help her in her quest to defeat the Devourer. At every turn, Ally unearths secrets that threaten to destroy those she loves.

The second installment of The Vulcan Legacies series will put Ally to the ultimate test, forcing her to face her fears and the true destiny she will fulfill as Azrael, the Seraph of Death.

Black Abaddon is the second book in the Vulcan Legacies series by Sasha Hibbs and is in my opinion even better than the first! Rife in danger and darkness, Black Abaddon is an addictive and heart pounding story with more shocking twists than you’ll know what to do with!

At this point in time I really feel like I know the characters and Hibbs only enhances this as she writes some big developments into her storyline involving our main character Ally and those around her. Personally I really like all the characters in this book, admittedly some more than others, but regardless I think each brings something very different but intense to the character dynamic within the story.

The differences between all the characters, from their species to their personalities, to their relationships, are something I find very interesting in this series. Everyone from our main character Ally to Jessica, Dave, Eli, Lucy, Brandi, Uncle Argyle, Parthenia, Elizabeth, the gypsies, the Nashoba and especially Marik in Black Abaddon all managed to have an effect on me; I’m invested in all their relationships and lives. Even those we’re just meeting, like Mariah and the Nosforatu Nation intrigue me and those who aren’t what we first thought like Marik have me needing to know more.

At the end of Black Amaranth, Ally suffered a tremendous loss and is still reeling from this in Black Abaddon. She’s in pain and we see a great deal of agony from Ally in this book. Heartbroken and struggling to go on, Ally really struggles with her self belief in this book. Hibbs still continues to keep us on our toes, as Ally’s destiny is still unknown and revelation after revelation changing what we know about her and what she’s meant to do.

Relationships between some characters change, including the one between Ally and Marik. He may have been the big evil in the previous book, but Sasha Hibbs pulls a rabbit out of her hat with him and manages to explore him with some shocking revelations that will change the way Ally, and we see him in Black Abaddon. Honestly, this guy just breaks my heart! I’m so head over heels for him and completely absorbed in his own story. Marik is a very layered character. He’s made mistakes, but everything he ever did was for his family and those he loves; he was used by a great evil, and is now unable to move on.

I’m going to be honest here…I never felt Ally and Michael’s relationship in the first book. I wanted to, but I didn’t. I feel for Marik though and the way he feels for Ally. He truly cares about her and it saddens me that she doesn’t quite feel the same. She loves him, but not as deeply as he cares for her. I do wonder what Hibbs has in store for their relationship. I’m not really a fan of any love triangles, especially when a heroine seems set on one person, but I do actually love Marik. I think he deserves some happiness!

Black Abaddon races towards a jaw-dropping conclusion that is in no way expected. Honestly, I’m shell shocked by how the novel has concluded. Hibbs throws in some unexpected developments, but none more so than the final chapter! Believe me—Black Abaddon will have you begging for more!

Source: Sent for review thanks to YA Bound Book Tours and the author (Thanks Nereyda and Sasha!)
Format: Kindle ebook
Buy it: Amazon (Kindle) | Amazon(Paperback) | Smashwords
My Recommendation: This series is awesome and if you want an angel tale with a difference then this is it!
Cover: I think it's beautiful---and goes with the first one perfectly!
Will I read sequel/continue with series: YES!!