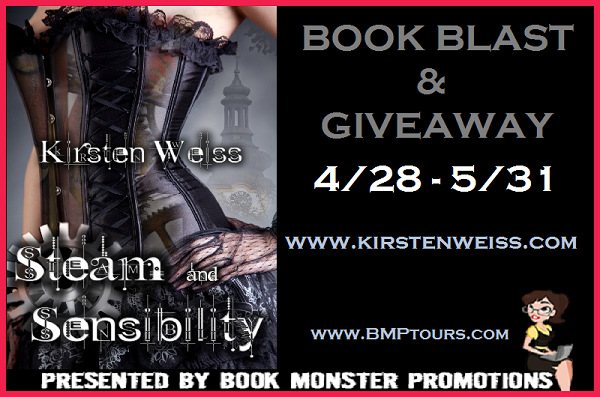 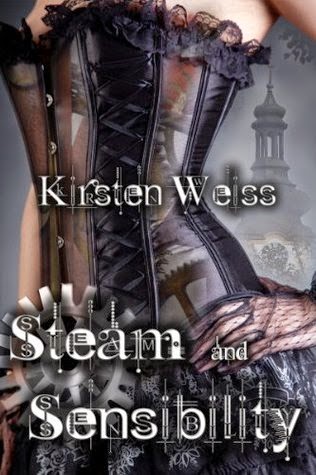 team rising. California Territory, 1848. Gold has been discovered, emptying the village of San Francisco of its male population. Steam-powered technology is still in its infancy.

At 19, Englishwoman Sensibility Grey has spent her life tinkering in her father’s laboratory and missing the finer points of proper British life. But when her father dies in penury, she’s shipped to San Francisco and to the protection of an uncle she’s never met.

The California Territory may hold more dangers than even the indomitable Miss Grey can manage. Pursued by government agents, a secret society, and the enigmatic Mr. Krieg Night, Sensibility must decipher the clockwork secrets in her father’s final journal, unaware she’ll change the world forever.

Magic, mayhem, and mechanicals. STEAM AND SENSIBILITY is a pre-Steampunk novel of paranormal suspense set in the wild west of the California gold rush.

A pebble rattled down the slope of the hill, and the flesh on her back twitched.

“You are being ridiculous,” Sensibility muttered. She had never started at shadows before. But never before had she alighted into an abandoned village, alone and in the dark of night.

A cold blot of worry penetrated her chest. Why hadn’t her uncle come for her? This was a tiny village. By now he must know her ship had arrived. Had her final letter gone astray? Had he sent word that he’d be gone, and she’d missed his correspondence?

Perhaps she should go look for him after all? Rising, Sensibility gazed down at her trunk, bound in leather straps. She did not wish to leave it and her few remaining possessions.

She would wait another quarter hour. After that, she must abandon her trunk and find someone who knew the whereabouts of her uncle.
A hand clapped over her mouth, crushing her lips against her teeth.
Something hard and sharp pricked the pulse in her neck. Horror sparked through her body. A cry escaped Sensibility’s throat in a muffled squeak.

“Hsst! Stay quiet and come with me if you want to survive the night,” a woman’s voice said.

The tip of the knife dug more deeply into her neck.

And then the pressure released and the knife trailed upward, pressing into the tender flesh beneath her chin. The blade was a point of fire, the pain a lance to her brain, driving her to her feet. Sensibility’s heart slammed against her stays. She couldn’t think. Couldn’t plan. The world collapsed to the point at her throat.

A hand grasped her hair, jerking her head back and pulling her around the trunk. She stumbled backward through a darkened doorway.

The woman shoved her, spun her away.

Her attacker struck a lucifer, sending out a shower of sparks. Head tilted, she held the outmoded match before her face. Harsh shadows flickered across high cheekbones, refined features and tumbled, chestnut-colored curls. Her eyes glowed cobalt in the reflected light of the flame. Little older than Sensibility, her attacker wore a fashionable blue and white-striped gown and tight blue jacket bodice. She jammed a cigarillo between her teeth and lit it, puffing contentedly.

Sensibility shoved herself away from the wall, fear pulsing up her throat. Gulping it down, she smoothed the front of her bodice. “Will you be so kind as to tell me what you want? If this is a robbery, I’m afraid you’ll be sadly disappointed.” But she became conscious of the weight of the silver coins she’d sewn into the hem of her skirt. They weren’t much – part of the collection taken up by her father’s English circle of friends in Lima. But if she lost them, she would be destitute.

The woman canted her head. From the top of a wooden crate, she retrieved a lantern and lit it with the tip of her cigarillo. “You got something worth stealing?” 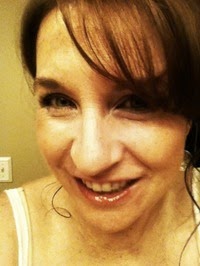 Kirsten worked overseas for nearly fourteen years, in the fringes of the former USSR and deep in the Afghan war zone.  Her experiences abroad not only gave her glimpses into the darker side of human nature, but also sparked an interest in the effects of mysticism and mythology, and how both are woven into our daily lives.

Now based in San Mateo, CA, she writes paranormal mysteries, blending her experiences and imagination to create a vivid world of magic and mayhem.

Kirsten has never met a dessert she didn’t like, and her guilty pleasures are watching Ghost Whisperer reruns and drinking good wine. You can connect with Kirsten through the social media sites below, and if the mood strikes you, send her an e-mail at kirsten_weiss2001@yahoo.com