Today as a bit of fun on the blog, author Kimber Leigh Wheaton interviews her two main characters, Ashlyn and Zane from her debut novel Shadow Fire. Asking her characters questions no one else dares, Kimber manages to put them on the spot and picks their brains as only she can! 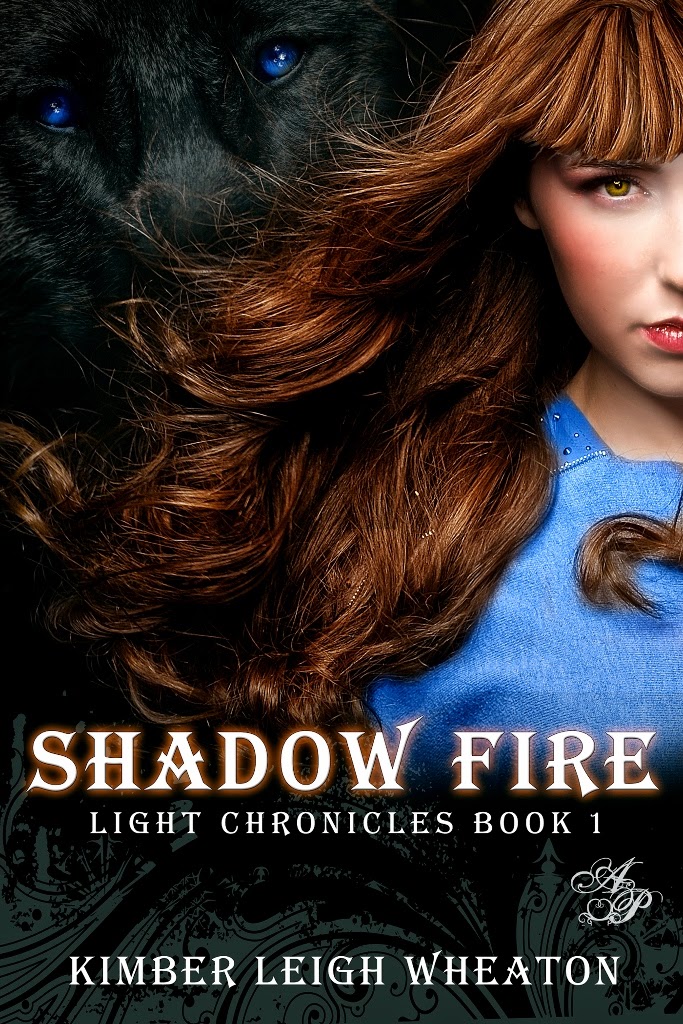 Ashlyn – a free-spirited teenager whose peaceful life is shattered when the village elders honor her with a perilous quest to recover a stolen relic.

Zane – a jaded mercenary, torn by his undeniable desire for Ashlyn and the dark secret that could make her hate him forever.

Delistaire – a malevolent sorcerer driven by an insatiable lust for power.

All three are bound together by an ancient relic supposedly infused with the power of a Goddess.

Shadow Fire – adventure, passion, secrets, and betrayal
As Ashlyn and Zane race to stay one step ahead of the evil lurking in the shadows, their passions are ignited and their bond strengthens. But will they find the relic before Delistaire? Or has their entire quest been orchestrated from the very beginning by a madman in pursuit of ultimate power?

Each installment of the Light Chronicles is a standalone story. 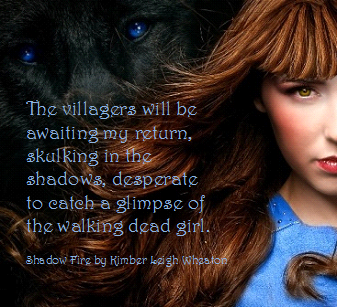 How did you feel the day you found out you were the Chosen?
It was awful. The entire town gathered in the town square that day. There were so many people packed together, it was hard to breathe. When the announcement came, it didn't click right away, you know? I remember being shuffled to the front by numerous hands, until I was standing on the wooden dais with the mayor. Everyone yelled and cheered. They laughed. I was being sent to my death and they all cheered.

Wow, that must have been rough. Do you know why they chose you?
I'd like to think it's because the townspeople thought I might succeed due to my hunting and martial arts skills. Perhaps I was considered the most expendable of the girls in the village. It doesn't matter anymore. What's done is done.

How about a lighter question? What's your favorite food?
Seafood, especially crab. I was introduced to the best fresh seafood during my time on the pirate ship. Taranis and his crew eat quite well.

Speaking of Taranis, tell me about the pirate captain.
Pirate captain? *snorts in laughter* It's impossible to describe Taranis so you'll just have to read about him yourself. How about a sheep in wolf's clothing? Yep, that describes him perfectly.

Interesting description. Tell me about Zane.
Handsome, loyal, powerful, sweet, my hero and my soul mate. Don't tell him, but I fell hard the moment I gazed into his eyes. *blushes*

So you believe in love at first sight?
I didn't. In fact, I thought my sister Celeste was crazy with her new love every few weeks. Please…

But… what about you and Zane?
Don't get me wrong, I was attracted to Zane immediately. I suppose I did fall in love pretty fast. But in my defense, we were on a dangerous quest we might not survive. Why bother fighting my feelings when any day could be my last?

What's your message to others based on your experience?
Live everyday like it's your last. We are responsible for shaping our own destinies. I thought being chosen was the worst thing that ever happened to me, the end of my life. After you read my story, you decide. Was being chosen the worst or the best thing that could have happened? I know my answer…

Cats or Dogs? Either, though I'd prefer a fenrir or a griffin

Flowers or Candy? Candy—what would I do with flowers?

Zane or Taranis? Funny… I won't dignify that with an answer. 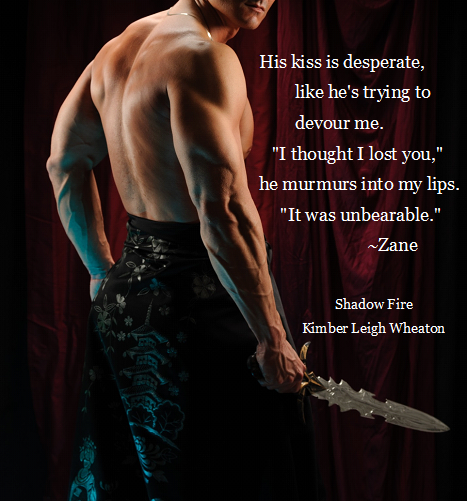 How did you end up taking the job to protect the Chosen?
I hadn't planned to. In fact it was the last thing I wanted. You see, I knew who was involved, and frankly I didn't want to deal with him.

Him?
Delistaire, of course. Are you going to let me finish answering your question?

Sorry. Please continue…
I was in Verdane having just dropped off a merchant caravan. My plan was to leave in the morning and head to my next job. While I was relaxing in the town square, a beautiful girl appeared. She was playing tag with the town orphans. I couldn't take my eyes off of her. Not only was she the most gorgeous creature I'd ever seen, but she was so vibrant, so full of life. Her smile warmed my heart. When one of the orphans yelled her name, I realized she was the Chosen. At that moment I knew I would protect her—I would give up everything in order to keep her safe. Even if that meant crossing paths with Delistaire.

Wow, that was romantic. How do you know Delistaire?
You know I can't answer that. I have no desire to give away secrets at this point.

What do you find most attractive about Ashlyn?
Everything. *laughs* Fine, if I have to choose, I suppose it would be her spirit. Ashlyn is a fighter through and through. She never gives up, even when the odds are against her. I admire the glimmer of determination she gets in her eyes when she's ready to fight.

What do you like least about her?
Do I look like a fool to you? *Rolls his eyes* Probably the same thing I like the most about her. She's not an easy person to protect…

You became a mercenary when you were twelve. How did you find work?
The mercenaries guild. There's one in every town.

They were willing to hire a child?
Sure things were difficult during the first year, but I had help. I was also quite skilled for a twelve-year-old. My guardian helped hone my fighting skills, and then I fought in the
coliseum in Palma. I rose among the ranks, made a name for myself. Afterward no one seemed to care that I was a child.

Who was your guardian?
Again with the questions I can't answer. How about something I can answer for a change?

Fine. What's your favorite color?
Blue. But not just any blue—the deep blue of the sea when the ship is out in deep water.

Any last words or advice?
If you're unhappy with your life don't sit back and hope for change. If there's something you really want, go for it. Never let fear hold you back. Sure you may fail sometimes, we all do. But nothing is worse than wondering what could have been had we only tried.


***Ooooh! Isn't this a fantastic character interview?!? I'm super excited to read this even more--I'm have to bump Shadow Fire up my to-review list :) 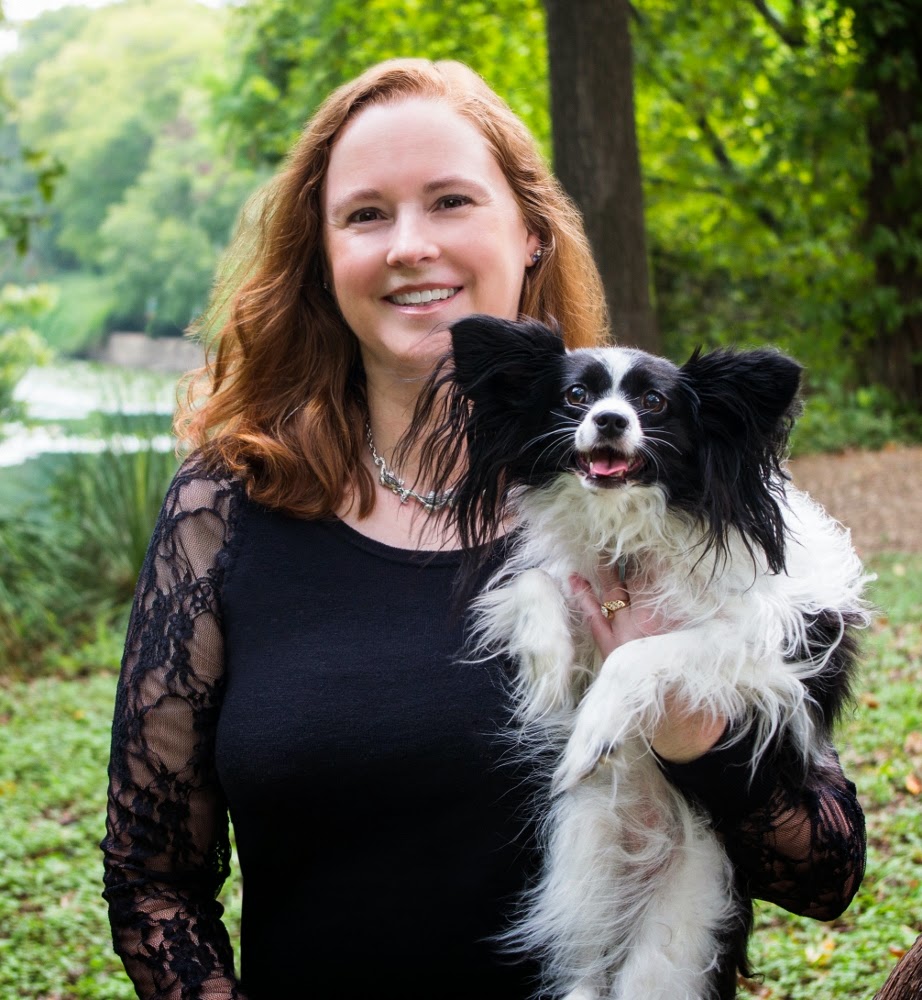 Kimber Leigh Wheaton is a YA/NA author with a soft spot for sweet romance and is a member of Romance Writers of America.

She is married to her soul mate, has a teenage son, and shares her home with three dogs and four cats. No, she doesn’t live on a farm, she just loves animals. Her house is filled with dragons, though she does lament that they are the porcelain, non-flying variety.

Kimber Leigh is addicted to romance, videogames, superheroes, villains, and chocolate—not necessarily in that order. (If she has to choose, she’ll take a chocolate covered superhero!)

I want to thank Kimber so much for putting this fabulous post together--it's been fun getting to know her characters. Shadow Fire is out now; be sure to pick up your copy :)

Email ThisBlogThis!Share to TwitterShare to FacebookShare to Pinterest
Labels: Interview