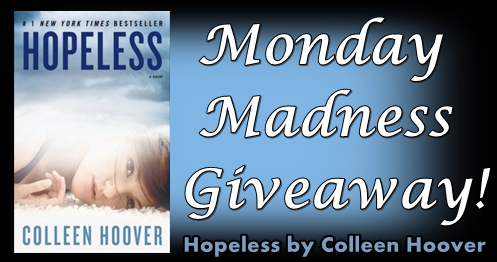 It's that time again! Monday Madness for April sees me feature one of the best NA novels I've read for a very long time--Hopeless by Colleen Hoover! Here's a little of what I thought about the book.....

"Colleen Hoover addresses some really strong issues in this book; exploring sexual abuse at the hands of a parent and the effect it can have on a person in such a painful and beautiful way. Featuring two great characters, a sensual romance and a powerful storyline, Hopeless has helped Hoover secure a fan in me and guarantees I'll be seeking out more of her stories!" 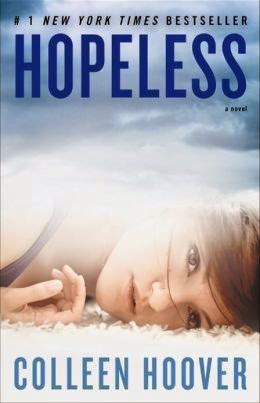 That’s what seventeen-year-old Sky realizes after she meets Dean Holder. A guy with a reputation that rivals her own and an uncanny ability to invoke feelings in her she’s never had before. He terrifies her and captivates her all in the span of just one encounter, and something about the way he makes her feel sparks buried memories from a past that she wishes could just stay buried.

Sky struggles to keep him at a distance knowing he’s nothing but trouble, but Holder insists on learning everything about her. After finally caving to his unwavering pursuit, Sky soon finds that Holder isn’t at all who he’s been claiming to be. When the secrets he’s been keeping are finally revealed, every single facet of Sky’s life will change forever.

Add on Goodreads or read my 5 star review!

Details:
· You MUST be a follower to enter!
· Giveaway is INTERNATIONAL or wherever The Book Depository ships to.
· Giveaway will run from today (28th April) until the 12th of May(2 weeks time!)
· Simply comment below with a way to contact you to enter
· Extra entries are available but are in no way necessary by:
+1 Letting me know what you think of Hopeless! (Have you read it? Do you want to read it? What's your thoughts?) and....
+1 For Tweeting, Facebooking or Sharing!