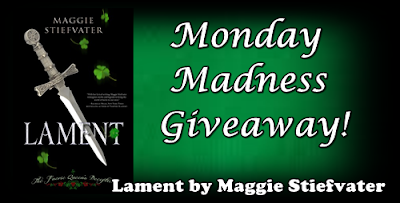 Welcome to the September 2013 edition of Monday Madness!

This September, the book I was most crazy about was an Australian novel by Ellie Marney, Every Breath which isn't available internationally, so rather than exclude people I'm going to be giving away a copy of an oldie but a goodie--a book I'm still mad about despite having read it years and years ago......Lament: The Faerie Queen's Deception by Maggie Stiefvater! 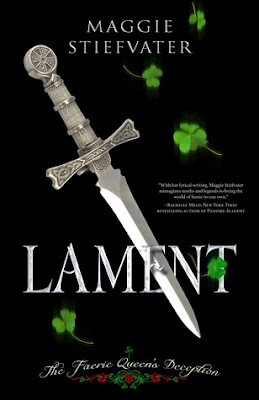 Sixteen-year-old Deirdre Monaghan is a painfully shy but prodigiously gifted musician. She's about to find out she's also a cloverhand—one who can see faeries. Deirdre finds herself infatuated with a mysterious boy who enters her ordinary suburban life, seemingly out of thin air. Trouble is, the enigmatic and gorgeous Luke turns out to be a gallowglass—a soulless faerie assassin. An equally hunky—and equally dangerous—dark faerie soldier named Aodhan is also stalking Deirdre. Sworn enemies, Luke and Aodhan each have a deadly assignment from the Faerie Queen. Namely, kill Deirdre before her music captures the attention of the Fae and threatens the Queen's sovereignty. Caught in the crossfire with Deirdre is James, her wisecracking but loyal best friend. Deirdre had been wishing her life weren't so dull, but getting trapped in the middle of a centuries-old faerie war isn't exactly what she had in mind . . .
Add it on Goodreads!

· You MUST be a follower to enter!
· Giveaway is INTERNATIONAL or wherever The Book Depository ships to.
· Giveaway will run from today (the 26th of August) until the 9th of September (2 weeks time!)
· Enter by filling out the form below.
· Extra entries are available but are in no way necessary by:
+1 Letting me know what you think of Stung and....
+1 For Tweeting, Facebooking or Sharing!


FILL OUT THE FORM TO ENTER!