Welcome to the By Blood tour thanks to Xpresso Book Tours! This tour is for both books in the series by Tracy E. Banghart, By Blood and Moon Child. 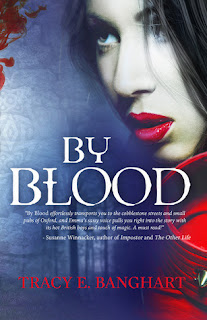 BY BLOOD: For 17-year-old Emma Wong, spending a summer in England should be a dream come true. Gorgeous scenery? Check. Lots of hot guys with accents? Yes, please.

Throw in an estranged mom, annoying new stepdad, and drooling baby half-brother, and it’s a disaster even her favorite cherry red leather jacket can’t fix. Even worse, there’s (hot) live-in research assistant Josh to contend with. The only thing more embarrassing than drunk-kissing him hours after they meet? Knowing he’ll be witness to her family’s dysfunction all. summer. long.

But when Emma meets a mysterious girl who happens to be a Druid, her vacation suddenly promises to be far more intriguing than she anticipated. Powerful rituals, new friends, an intoxicating sense of freedom...and Simon, the sexy foreign stranger she was hoping for. It’s all a perfect distraction from dirty diapers and awkward family dinners.

Trouble is, intriguing doesn’t often mean simple. And Emma is about to discover just how not simple her life really is.

By Blood is a novel about the ways that blood can bind us to others – or tear us apart.


MOON CHILD: Before Emma's adventures in Oxford, her best friend Diana came face-to-face with a killer... 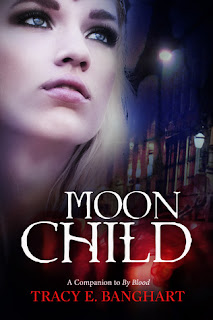 Diana Calvert is so over high school. Who cares if Olivia hates her? And David needs to forget about having a crush on her STAT. Even Emma’s crazy fashion choices can’t keep Diana entertained. All she can hope for is a dance scholarship to a college as far away as possible from too-small, too-boring, too-nothing-ever-happens New Freedom, PA.

Then Diana meets Nicholas Woodhaven. He’s pale, angry…yet weirdly charming. The more time they spend together, the more she wonders who – or what – he really is. Because he isn’t anything like the other guys she knows. Not with the whole only-going-out-at-night thing. And living with his creepy aunt. And not going to school.

Just when Diana thinks she’s got Nicholas all figured out, people in her small, nothing-ever-happens town start dying. She has to wonder – can she trust him? And even more alarming – could she be next?

A murder mystery with a paranormal twist, Moon Child is best read under the covers with a flashlight...if you dare!

A strong gust of wind blows down through the cemetery and rattles around in the trees that line the wall. It brings with it the heady scent of wood smoke, and the wild darkness of fall swirls around me. It feels like Halloween; not the candy-coated, silly costume Halloween, but the mysterious, wind-blown, ghosts-are-walking kind. All Hallow’s Eve. If spirits are out there, if they exist, on a night like tonight they’d be restless.

I shove my hands into my jacket pockets and shiver.

The line forms quickly and somehow I end up next to Olivia and Jared, instead of Helen.

Tyler calls out, "Eyes out for the flashlights! When you get past the church, try to stretch back and find us, so we’ve got it all covered."

Olivia grabs Jared’s hand. Beyond them, Esther fades into the darkness.

Away from the spotlight illuminating the front of the building, the night closes in around us. Still, it’s not entirely dark; the nearly full moon has anointed the edges and tops of the marble stones with silver. Goosebumps race up my arms. I move closer to the stone wall. My eyes strain as I search the darkness for the small round cylinder of a flashlight. I try not to think about the bodies moldering beneath my feet.

"Do you guys think it’ll be, like, on a headstone or something?" I call, hating the way my voice shakes, as I carefully pick my way among the graves.

"Shut up, Diana," Olivia hisses. "You’re going to lead David right to us." She breaks the line, drifting closer to Jared. A few beats later, I hear a soft giggle. I want to call out to Esther, see what she thinks, but Olivia’s probably right. Yelling isn’t the best way to conceal our location. Plus, Esther probably wouldn’t answer anyway. Which would only up the creep factor.

The darkness is multi-layered, with the gray corners of headstones losing themselves in the black, skittering shadows of moving tree branches. I walk slowly, hands out, praying I don’t run into anything. Or anyone. Gulp. Every crackle of fallen leaves and hint of movement out of the corner of my eye sets my teeth on edge. Despite the crisp, fresh air on my face, I’m sweating.


Relax, Diana. It’s just David. There are no real monsters in this dark.
The mantra plays in my head. I’ve known David forever, just like Helen and Tyler, and he’s as not scary as they come. Though, lately, it seems like things have gotten more complicated between us. Helen thinks he’s got a crush on me. All I know is that he’s really awkward when we’re together now, and I never know what to say either. I wish I liked him back, or knew how to let him down easy, but all I seem able to do when he’s around is leave.

Another soft giggle sweeps along the breeze. I look toward Olivia. We’ve reached the end of the church now and should move to close the space behind the building, but she’s already far away, and really, the cemetery is too large for eight of us to cover. I don’t see any sign of Matthew. Knowing him, he’s skipped the game altogether and gone off to sneak a smoke. Honestly, I kind of hope he has. I’d rather not run into him out here. Like the graveyard, he’s plenty spooky in broad daylight…and downright scary in the dark.

Ever since I caught him drawing bloody torn-off hands in his notebook in seventh grade, I’ve steered clear. He’s the last guy you’d expect to work in a flower shop, but rumor is, it’s the only place in town that would hire him. And Pastor Richardson has a strict rule about his sons working part-time jobs. I guess it’s one of those parent things – builds character or whatever.

My lip twitches at the image of spiky Matthew Richardson arranging flowers, and I keep moving, buoyed for the moment.

A disappointed groan in the distance makes me jump; I guess David’s tagged somebody. I pause, trying to decide whether to go closer to the others or head away from the group towards the graveyard wall.

Another strange noise gets me moving. Alright, that’s it. I aim for the darker line of shadows along the wall. So what if I don’t find the flashlight? If I was on Tyler’s side, with him and Helen, it’d be different. But now, on my own out here…my wussy inclinations are overwhelming. No one’s going to know if I slip over that wall and into the parking lot. I can wait out the game under a streetlight, away from the sighing wind and sleeping corpses.

A sudden burst of wind explodes behind me and I let it push me forward, faster and faster.

Just as I’m about to reach the wall, the toe of my sneaker catches on a low, flat grave marker. I fall forward, arms flailing. Please don’t let me break an ankle. I try to get my hands out. I’ve gotta be able to dance. Panic closes my throat. This can’t be happening. I brace for impact.

Ooomph. Something stops me with a jerk, but it’s not the ground…it’s more like a stick or an arm, pressing against my breasts. I rock back with a thud against someone.

A sudden, blinding vision of rotting corpse arms embracing me drowns every rational brain cell. I open my mouth to scream my fool head off.

"Ow!" A voice grunts just above my ear.

I swallow the scream. Somehow, that ow brings me back to reality. And a realization.

It’s got to be David. Duh. The stupid game. The Grog. Of course. And he’s not only tagged me but copped a feel while doing it! I push away and look up, ready to give him hell.

The guy’s face glows pale in the light of the moon. Shadows crowd beneath stark cheekbones, exposing the shape of skull beneath the skin.

"Who the hell are you?" I ask, and the wind sucks the words away. 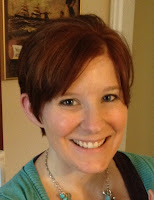 Tracy E. Banghart is a cheesy movie–loving, fantasy football–playing (go Ravens!), globe-trotting Army wife who began “practicing” her craft at the age of five, when she wrote her first story. She loves visiting the international friends she met while pursuing her MA in Publishing and spends a portion of every summer at her family’s cabin in Canada, where she finds inspiration and lots of time to relax on the dock. She lives with her husband, son, two lazy dogs and one ornery cat. When not writing or spending time with her family, she is on a mission to bake the perfect cupcake.

These books sound fantastic! I for one plan to add them to my TBR list ASAP!