Book Shelf: Every Breath (Every, #1) by Ellie Marney 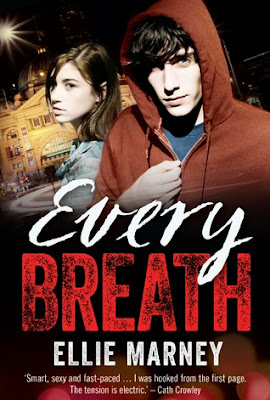 Rachel Watts is an unwilling new arrival to Melbourne from the country. James Mycroft is her neighbor, an intriguingly troubled seventeen-year-old genius with a passion for forensics. Despite her misgivings, Rachel finds herself unable to resist Mycroft when he wants her help investigating a murder. And when Watts and Mycroft follow a trail to the cold-blooded killer, they find themselves in the lion's den - literally.

A night at the zoo will never have quite the same meaning again...

Every Breath is a deliciously mysterious thriller set in the haunting streets of Melbourne, and is brimming with excitement, intrigue and sizzling chemistry; featuring two passionate and daring teens on a fast paced adventure as they go on the hunt for a cold blooded killer!

I have to say, I found myself pleasantly surprised by Every Breath. I'm still new to the contemporary genre and haven't read a lot of Australian fiction, besides the ones I read in high school, so I was a little bit hesitant when beginning Every Breath. I quickly found myself immersed in this urban tale and happily became involved and invested in Rachel and Mycroft's adventure.

Every Breath was well told and fast paced. It's a real who-done-it kind of story from the opening chapter, and as teen sleuths Mycroft and Rachel put the pieces together, author Ellie Marney does a fantastic job with the mystery and details. Told against a Melbourne backdrop, Every Breath stays true to many typical Aussie sayings and attitudes, featuring a real authentic Aussie feel that only an Australian author could write. Even though there are some aspects of the story that seemed far fetched there were also many times where everything felt very real and plausible, and this is one of the things that drove the story for me--those believable aspects blended in with the scenarios the teens found themselves in as well as the interactions and relationships they shared. Rachel and Mycroft proved to be really enjoyable to follow.

Rachel really is a typical Aussie teen, and name aside, it was easy to emphasize with her. She's just a normal girl with a kind nature, brave soul and feisty attitude at times. Mycroft on the other hand was a diamond in the tough; a tough bad boy genius whose street smarts and whose unexpected easy to talk to nature proved to be unexpected.

I found Mycroft to be very driven and passionate and it's this passion that pours over to Rachel and gives her something to fight for in this whole new city world she's still trying to find her feet it. The tension and chemistry between Mycroft and Rachel is written brilliantly on Ellie Marney's part, with the intricate banter and dialogue between them a highlight of the story. These two have fabulous chemistry as friends and partners in crime that spills over into the more intimate parts of their relationship.

With a high stakes and nail biting ending, Every Breath has me quite excited for it's sequel, Every Word. Ellie Marney's debut into the YA world is smart, exciting and electric.....I'm looking forward to see what this duo get up to next!

Source: Sent for review by Allen & Unwin (Thank you Lara!)
Format: Paperback
Buy it: Bookworld | The Nile | Amazon (Kindle)
My Recommendation: Looking for a bit of mystery? A bit of fun? Then Every Breath is for you!
Cover: I'm quite diggin' it! It's very urban-chic
Will I read sequel/continue with series: Yes!