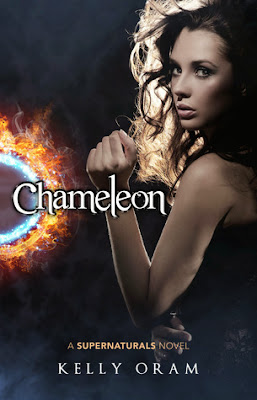 For small-town rebel Dani Webber magic and monsters are no more real than the Easter Bunny… until the day she accidentally stops time. Dani quickly discovers that not only do supernaturals exist, but she herself is one of them. This is great news for her life-long best friend Russ, who can finally come clean about his own supernatural status and his undying love for her. Before the two can start to enjoy the long overdue relationship, Dani is taken by a powerful council of supernaturals who believe she is the Chosen One destined to save them from extinction.

As if being kidnapped and expected to save the world isn’t bad enough, an ancient prophecy warns of the Chosen One’s dark nature: “Only the truest love will keep her an agent for good.” The council believes they know who this “true love” is and, unfortunately, that person isn’t Russ. The mysterious, powerful and devastatingly handsome Seer is the last person Dani wants in her life, but when she starts having visions of a horrific future, she has no one else to turn to for help.

Soon Dani finds herself torn between two very different boys with two very different opinions of whom she can trust. With the visions getting worse and time running out, Dani is forced to put aside her feelings and work with both the Seer and Russ before an ancient evil is unleashed upon the earth.

I have to be honest here and say I'm at a mixed mind when it comes to Chameleon by Kelly Oram. I'm a BIG Kelly Oram fan, having loved all the books of hers I've read so far, so I was really excited to read Chameleon. It had a great premise and knowing Kelly's knack for great characters and quirky storylines, I had high expectations. Unfortunately, Chameleon just wasn't for me.

It may have just been me, but Chameleon failed to suck me in like I wanted it too. Don't get me wrong, the storyline was interesting enough, but there was just something missing. Something I looked for time and time again as I read that I just didn't find.

I struggled to connect with the characters the most. Dani started out as feisty, fiery heroine, but I felt she lost who she was as the novel progressed. This may have been intentional to show her confusion and uncertainty in this whole new supernatural world she was discovering, but it was just lost on me as I second guessed and disagreed with so many of her choices and actions.

This may be one of the few, if only, books where I've ever thought the "best friend" was the better choice for our main character. Gabriel was a decent enough guy, but he was just too bland and boring and "good" and I didn't really buy his and Dani's love. I tried though. I did. I wanted to feel it--kept waiting for the moment when I did, but it just never came. I hate to say it, but it just seemed too fast and far fetched that these two people would connect the way they did; so fast and so soon. I understand this connection had a legitimate reason for happening, but it still didn't sit right with me.

Russ was the one I liked, the one I wanted Dani to choose. I didn't like that Dani went from wanting Russ desperately one moment to finding her "true love" in Gabriel the moment he was out of the picture. Just didn't seem legit.

I have to give Kelly Oram props for thinking outside of the box with this book however. The mystery that surrounds what Dani is gives way to a really interesting supernatural creature. Dani's abilities are something I've never ever seen before and I definitely enjoyed this aspect of the book. Add this with the characters of Russ, Duncan and perhaps even Gina and I may pick up the next book to see if Kelly Oram can win me over once more!

Source: Sent for review by the author (Thank you Kelly!)
Format: Kindle ebook
Buy it: Amazon | Barnes & Noble
My Recommendation: Fans of Kelly Oram will want to give this a go.
Cover: The cover is stunning.
Will I read sequel/continue with series: Maybe. Maybe not......