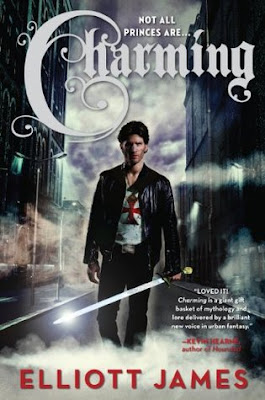 Charming by Elliott James
Released on: September 24th 2013 (Awww :( Too far away)

He comes from a line of Charmings -- an illustrious family of dragon slayers, witch-finders and killers dating back to before the fall of Rome. Trained by a modern day version of the Knights Templar, monster hunters who have updated their methods from chainmail and crossbows to kevlar and shotguns, he was one of the best. That is-- until he became the abomination the Knights were sworn to hunt.

That was a lifetime ago. Now, he tends bar under an assumed name in rural Virginia and leads a peaceful, quiet life. One that shouldn't change just because a vampire and a blonde walked into his bar... Right?

Add it on Goodreads!


Thoughts:
This sounds fan-freakin-tastic!!! Honestly. If this book was released (and in my hands) I would be reading it right now! I'm a fan of anything fairytale related and not only do I love retellings but I adore anything where and author plays around with something fun and Charming? Looks right up my alley! Oh! And how brilliant is that cover?!? Kinda makes me think of the cover for Cinder though, lol......


What do you think? Will you be adding Charming to your TBR list?