Book Shelf: V is for Virgin by Kelly Oram 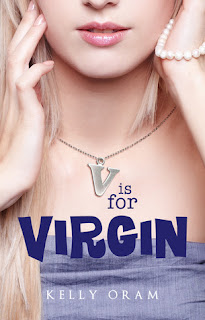 When Val Jensen gets dumped for her decision to stay a virgin until marriage, the nasty breakup goes viral on YouTube, making her the latest internet sensation.

After days of ridicule from her peers, Val starts a school-wide campaign to rally support for her cause. She meant to make a statement, but she never dreamed the entire nation would get caught up in the controversy.

As if becoming nationally recognized as “Virgin Val” isn’t enough, Val’s already hectic life starts to spin wildly out of control when bad boy Kyle Hamilton, lead singer for the hit rock band Tralse, decides to take her abstinence as a personal challenge.

How can a girl stay true to herself when this year’s Sexiest Man Alive is doing everything in his power to win her over?

V is for Virgin is an incredibly entertaining contemporary romance that deals with a real important issue that faces teens every day and yet is never lacking in sass, humour and romance! This book is fun and funny and one that I can see myself re-reading again and again!

There are no words to say how much I loved reading this book. Honestly, I’m having trouble putting what I think into words so you’ll just have to bare with me while I figure it out...... Ordinarily, I’m not the biggest fan of contemporary novels, but when I saw this, read the description and learned what it was about I knew I just had to read it. And I’m so glad I did! For me, this is one of those books you read and then stays with you.

Now, I’m not going to get overly personal about this book....as least, I’m going to try not to. Kelly Oram has created such a beautiful thing with this book and this is a topic that really is close to my heart. Considering it’s not something I really feel the need to talk about day by day it might surprise some people to learn that I’m actually a Christian. And you know what? I became that way by choice. I wasn’t raised with religion, but rather chose that path on my own a while back. And yet my beliefs and morals are my own, no one else’s (even my faith) and they’ve never been impacted by others around me. And my body....that’s mine too....to share with someone when I see fit. So that begin said, V is for Virgin? Yes! This book definitely spoke to me.

However, overall I think the brilliance of this book is that our protagonist Val’s choice isn’t based on religion. It’s not her religion that leads to declaration that she’ll stay a virgin until marriage, but rather it’s a promise she made to herself for no other reason than she wants to share that special first moment with the one she plans to spend the rest of her life with. I’m a big believer in pro choice—everyone has the right to make their own choices so to me that’s really beautiful.

There are so many aspects about this book that just guaranteed that I was caught, hook line and sinker the entire time I was reading. Author Kelly Oram has such a fantastic voice! This is the first book of hers that I’ve read, but it definitely won’t be the last! Her writing flowed perfectly and despite the sometimes tedious topic of sex and sex involving teens, Oram managed to weave together humor, wit and sass with electric romance, powerful friendship and contemporary entertainment. Her dialogue, her descriptions, her settings....they all just went together perfectly to create this story.

The thing about this book is that it’s fun. It really is. Even though V is for Virgin is so incredibly good at promoting good strong moral values, Kelly Oram also creates such a fantastic cast of characters to fill the pages of her fun, flirty and sassy story with an edge, that even with such a heavy topic, all the characters within V is for Virgin had such personality and life. They really took on a life of their own and yet could easily be the person next door or your best friend. They were real and their emotions, flaws and fears were all something that we deal with in day to day life. And I loved each and every one of them!

That being said, oh my goodness, do I love Valerie Jenson! If ever there is a contemporary main character that I just wish was real it’s this girl! From start to finish, Val was a real joy to read about! This girl was taking names and kicking butt all in an effort to make a statement. Val was such a strong young woman. At a time in her life where it would be so easy to succumb to peer pressure and just give in, Val managed to hold on to her integrity and keep her promise to herself as well as stand up for others like her to. Becoming a role model for other young people throughout the book “Virgin Val” was someone that you couldn’t help but love. She was in no way a shy, timid, little virgin. She stood up for what she felt and her fire was catching.

Val’s cause really touched me and I felt empowered as I read the story. It was thrilling to see Val stand up for not only herself, but all those who dared to say no; who wanted to wait! That alone was enough to make me love her, but it didn’t stop there! Val spoke up for those who were pressured, coerced or coaxed into making that choice when they really weren’t ready and then had to live with the consequences of those decisions; young women who had gotten pregnant young and had to make tough choices. Kelly Oram was a genius in the way she explored these issues throughout the book through Val---it was subtle and yet had true meaning. It made you think. I know it certainly did me—even as I was lost in the entertainment factor of the chemistry and tension of Val and Kyle, the rock star who was trying to get her to change her mind.

Val’s relationships in this book were really cute. From Zach, to Issac and then to the famous Kyle, they all changed her. I even found myself wondering if Issac was the one Val would end up with simply because Oram wrote their relationship so well. And yet the chemistry between Val and Kyle was undeniable. From the witty, hilarious dialogue between them to the few sweeter moments, these two were exciting to read about—I never knew what would happen between them next!

You know what I liked best about Kyle Hamiliton’s character? It was that Kelly Oram stayed true to the teenage personality of a guy. Considering Kyle was a cocky, naughty, abet somewhat nice at times rock star, he was still very much into getting into Val’s pants. He cared about Val and wanted her, yet he was still real. Don’t get me wrong. He was sexy as all hell and I loved his cocky nature as well as his sweeter side but he was also a typical guy. Oram didn’t turn him straight into this sweet, kind guy who fell head over heals for Val and then decided to wait for her; no, he didn’t become some entire new character, he was honest about what he wanted, how he felt and what he could offer Val.

The only flaw in V is for Virgin is its ending. It came on suddenly and I certainly wasn’t ready for it. I turned the page ready for the next chapter and found myself in the epilogue, four years in the future. Perhaps it’s because I was so engrossed in Valerie’s tale and her relationship with Kyle that I was disappointed to loose all that time. I would have liked to explore more, but that being said the ending was perfect. It was cute and fitting, and after the entire story of V is for Virgin, I can’t imagine it ending any other way.

So, with a hard-hitting topic, fabulous characters and excellent storytelling, V is for Virgin is a brilliant read! Author Kelly Oram creates such a fun and yet deep tale that from beginning to end V is for Virgin right up there with Perfect Chemistry and Pushing the Limits for me. One of my favourites this year!

Source: Sent for review from author via I Am A Reader, Not A Writer (Thank you ladies!)
Format: Kindle Ebook
Buy it: Amazon
Recommendation: For everyone! Absolutely everyone! This book is fun and sassy, with romance and humor--you'll love it!
Cover: I love it! It's simple, but it's brilliant!
Will I read sequel/continue with series: This is a stand alone, but I'll definitely read more from Kelly Oram....