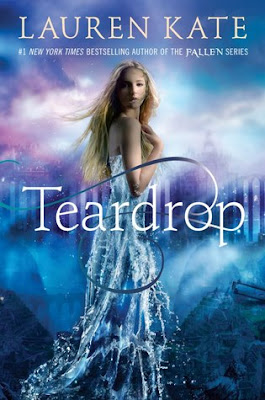 Teardrop by Lauren Kate
Releases on: October 22nd 2013
Add it on Goodreads!

Never, ever cry. . . . Eureka Boudreaux's mother drilled that rule into her daughter years ago. But now her mother is gone, and everywhere Eureka goes he is there: Ander, the tall, pale blond boy who seems to know things he shouldn't, who tells Eureka she is in grave danger, who comes closer to making her cry than anyone has before.

But Ander doesn't know Eureka's darkest secret: ever since her mother drowned in a freak accident, Eureka wishes she were dead, too. She has little left that she cares about, just her oldest friend, Brooks, and a strange inheritance—a locket, a letter, a mysterious stone, and an ancient book no one understands. The book contains a haunting tale about a girl who got her heart broken and cried an entire continent into the sea. Eureka is about to discover that the ancient tale is more than a story, that Ander might be telling the truth . . . and that her life has far darker undercurrents than she ever imagined. From Lauren Kate comes an epic saga of heart-stopping romance, devastating secrets, and dark magic . . . a world where everything you love can be washed away.

Thoughts:
I have to be honest here, I may own the first three Fallen books, but I've actually only read the first book. And yet....I really wanna read this. Admittedly the cover caught my attention, but the story does sounds really good too. LOL.


What do you think? Will you be adding Teardrop to YOUR TBR list?
And what are YOU waiting on this week?