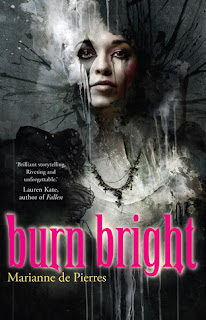 Into a world of wild secrets and deadly pleasures comes a girl whose innocence may be her greatest strength.

In Ixion music and party are our only beliefs. Darkness is our comfort. We have few rules but they are absolute . . .

Retra doesn’t want to go to Ixion, the island of ever-night, ever-youth and never-sleep. Retra is a Seal – sealed minds, sealed community. She doesn’t crave parties and pleasure, experience and freedom.

But her brother Joel left for Ixion two years ago, and Retra is determined to find him. Braving the intense pain of her obedience strip to escape the only home she’s ever known, Retra stows away on the barge that will take her to her brother.

When she can’t find Joel, Retra finds herself drawn deeper into the intoxicating world of Ixion. Come to me, whispers a voice in her head. Who are the Ripers, the mysterious guardians of Ixion? What are the Night Creatures Retra can see in the shadows? And what happens to those who grow too old for Ixion?

Retra will find that Ixion has its pleasures, but its secrets are deadly. Will friendship, and the creation of an eternal bond with a Riper, be enough to save her from the darkness?

Listen well, baby bats. Burn bright, but do not stray from the paths. Remember, when you live in a place of darkness you also live with creatures of the dark....

Burn Bright is the first book in Marianne de Pierres Night Creatures series and is a darkly alluring tale full of seductive adventure and steeped in mystery!

Even after finishing this novel, I’m still not quite sure what to make of it. I have mixed emotions where it’s concerned. Marianne de Pierres has crafted a world so very different from any I’ve ever read before in Burn Bright. Dark and infinitely intense, this book blends the paranormal with dystopian in a tale that’s as mysterious as it is intriguing but there were also times where I found my mind wandering, simply due to the nature and darkness of the tale.

While this book didn’t exactly blow my mind, it was impossible not to get lost in this intense world where partying and pleasure are ones soul focus and darkness and danger lurk around every corner. The endless night of Ixion is an intense world were desire and danger mingle as one and the hard, powerful Ripers control those living on the island.

Overall, I was quite impressed with Marianne de Pierres storytelling. Her writing is vivid and descriptive and she paints a harshly thrilling picture of the world of Ixion. Stakes always seem high to our heroine Retra and as she navigates her new home in her quest to find her brother. There was so much mystery to this novel; from the goings on in Ixion to the motivations of the characters to just what the Ripers are and their connection to the Night Creatures that inhabit Ixion. While ordinarily I would soak up this mystery, there were times in Burn Bright where it got old. I constantly felt like I was fighting to understand the story and in turn wished for more information and background information on exactly what kind of place Ixion was.

That begin said, for the most part Burn Bright was quite riveting. I found it very clever that we only know the things about Ixion that our protagonist Retra does. Marianne de Pierres’s world is so vividly intense and there’s such an aura of danger and desperation that clings to the pages of this story. Underneath the cover of darkness, teens party and enjoy life; soaking up the clubs, drugs and intoxicants that litter Ixion unaware and uncaring about what is really going on on this eerie island. Fear plays no part in their lives as they soak up all Ixion has to offer.

Retra, our heroine is a very shy, reserved girl who has escaped her controlled life in Grave where women wore veils and did not speak and men ruled, with the Council or Elders and their wardens residing over the running of the city. Retra is a hard topic for me. I liked Retra, I did—there’s something about her that’s so innocent and endearing, even if she came across as being too naive at times but I never felt as though I really loved her. I certainly never disliked her, but for whatever reason it was a struggle to connect with her at times. I can certainly see her potential—she’s already grown and accepted so much but I think I’ll wait until the next book to decide my opinion of her.

As far as the characters in this series go, I’m actually really liked them. In Ixion, people are selfish and intent on living their own lives, so it was interesting to see Retra come across a great cast of characters who despite this also managed to be kind and good friends to her. Rollo and Suki I especially liked, but Charlonge as well with the White Wing members Kero and Krista-Belle made nice editions to the story.

If I have one word to sum up the Ripers in this book it would be; scary. These guys plain out were scary. Seeing the story through Retra’s eyes they appeared so harsh and unbending. For a girl so scared and frightened at times, the Ripers were a powerful and controlling force that gave shivers at times simply by the way they acted. And because of this, I’m even more intrigued by Lenior. Honestly, I don’t think he’s innocent at all, but I definitely think his new bond with Retra will shape who he is and his actions throughout the series. He’s the Riper leader and obviously believes in what they’re doing, but he’s also beginning to feel possessive/protective over Retra and it’s this contradiction that makes me want to learn more about him.

Overall Burn Bright is a great start to this series. While there are some aspects of the novel that didn’t exactly appeal to me, I’m looking forward to see where this series goes. Fingers crossed it lives up to its potential and continues to get better with each book!

Source: Sent for review by Random House Australia. (Thank you so much Dorothy!)
Format: Paperback.
AU Release Date: Available now!
Buy it: Booktopia // The Nile
Recommendation: This series probably won't be for everyone but if you're an older reader looking for something dark and different this is the series for you!
Cover: I actually really like it! It's haunting but beautiful!
Will I read sequel/continue with series: I will. I'm intregued to see where Marianne de Pierres takes the series.....