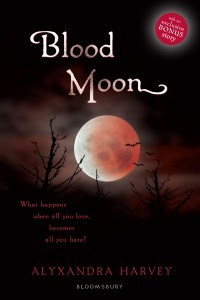 "I can still smell his blood, Lucy. I can smell it everywhere. It's in the grass, in the air, on me. I'm not safe."

When the vampire tribes convene for the rare Blood Moon ceremonies, Solange Drake is plunged into a battle with her feral nature. The Drake brothers have been raised knowing they had to protect their younger sister at all cost. But forbidden magic and a mysterious stranger have put all of them in terrible danger.

Nicholas is going to have to make a difficult choice: between his girlfriend, Lucy, and his little sister, Solange - blood or love?

Blood Moon is the 5th book in Alyxandra Harvey’s seductive Drake Chronicles and will captivate you from start to finish with it's thrilling danger, romance and excitement!

This series is a thrilling one to read! Whoever said vampires were dead and gone have never read this series. Each book is fast paced, and endlessly exciting and Blood Moon is no exception. Unlike the previous books in the series where Harvey featured heavily on one specific couple, or two in My Love Lies Bleeding’s case, Blood Moon features heavily on Solange and the internal conflict she is continuing to struggle with after her transformation.

Featuring the POV’s of Solange, Lucy and Nicholas, Blood Mood is extremely heart pounding. Alexandra Harvey continues to build on the Drakes, with new dangers and new enemies coming into play. The plotline of this story was quite mysterious and there were many moments where I wasn’t a hundred percent sure what was going on. The Huntsmen that make their appearance in this book proved to be an intriguing development and I’m eager to find out what their intentions are and who they work for.

Considering Lucy is still my favourite character in this series to date, I was thrilled to be in her head once again. There’s no one out there like Lucy and I eat up any moment where I’m inside her brave, daring, extremely snarky and devoted head. Solange is a whole other story. I’ve always adored her, and I was surprised to see how much she’s struggling in their book. Harvey’s inclusion of a voice in her head; driving her and influencing her is interesting. And certainly not something I was expecting. I want to know what this means for Sol now that Viola has control of her and is acting so cruelly.

I was delightfully surprised to discover so many chapters of Nicholas’s POV in this book. Unlike Solange and Lucy, this is the first time his POV has appeared in the series and if by golly I don’t love him more after Blood Moon! His devotion and the love he has for Lucy is simply beautiful and I just adore these two together. They have such a sweet, endearing, yet electric relationship. Nicholas truly was brave during his kidnapping, but I’m nervous about the effect it will have on him in the future. It’s obvious already that’s it’s changed him and I really don’t want that to happen.

All the characters I’ve come to love throughout this series make an appearance in this book. Kieran, Hunter, Isabeau, Christabelle and all the Drake brothers are back; Quinn, Connor, Logan, Duncan and the rest appear, as well Helena and Liam Drake, Bruno and a cast of others that I love.

In a special treat, our Australia edition of Blood Moon also sports a bonus story featuring Helena and Liam Drake, back before they were the heads of the Drake family. In fact this is the tale of how begin to fall in love and I for one found it a beautiful touch to the series. Helena has always been a kick-ass vampire mum and I adored getting to see her and Liam in their younger years! My only issue is that as a short story it seemed rushed and seemed to skip over all the best parts I was looking forward to witnessing the most—their initial meeting, dating etc—and I think it would have been tones better if their tale had been a full length story in the Drake Chronicles.

Blood Moon’s ending seems to come on rather quickly and leaves me quite unsatisfied. As with all the books in this series, I wasn’t ready for it to end and I cannot wait to get my hands on the next instalment in the series!

Source: Sent for review from Bloomsbury Australia. (Thank you Sonia--you are a goddess!)
Format: Paperback.
AU Release Date: Available now!
Buy it: Booktopia // The Nile // The Book Depository
Recommendation: This is actually a really fun, exciting vampire series. If you're still a vamp lover and want to sink your teeth into something really enjoyable this series is for you!
Cover: I'm actually a real fan of the Aussie covers in this series--they're so dark and beautiful, but this is my least fave so far.
Will I read sequel/continue with series: YES!