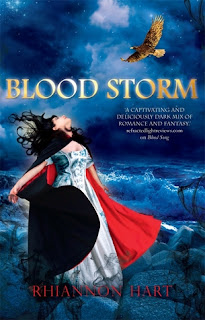 The rain wanted to be ocean; the ice in the mountain caps wanted freedom. I never knew that water held such longing. The clouds above my head rumbled like a growling wolf, impatient to release their burden. I held the rain there a moment longer. I turned to Renata, heard her gasp and knew my eyes glowed blue.

I spoke a single word. 'Rain.'

In the Second Book of Lharmell, Zeraphina and Rodden must travel across the sea to find the elusive ingredients that will help them to win the coming battle against the Lharmellin – but shadows from Rodden’s dark past may come back to haunt him. And while she learns to harness her new abilities, Zeraphina still fights the hunger that makes her crave the north – not to mention avoiding her mother, who wants to see her wayward daughter married to a prince at all costs.

Blood Storm is the dark, exhilarating sequel to Aussie author Rihannon Hart’s debut, Blood Song, and will draw readers once again into the heart of this series in an eerie, driven sequel that will leave you want more, more, more!

Considering that Blood Song was one of my favourite books of last year, to say I’d been looking forward to this sequel would be an understatement. While it didn’t exactly hold my attention in the death grip that Blood Song previously had, I found Blood Storm to be an exciting follow up, one that certainly had its fair share of mystery and revelations.

Picking up a few months after the first book concluded Rihannon Hart once again captivated me with Blood Storm’s well written, well told story that had my complete attention from the moment I opened the book. There’s something so wonderful about Rihannon Hart’s story telling. Weaving romance and fantasy together beautifully, the writing and detailed prose easily sweep you into the story and incredible world of Pergamia and Lharmell!

I admit that I did feel that the progression of the storyline within Blood Storm was a little bit slower than its predecessor, but that didn’t in anyway deter me from the book. This dark fantasy world is filled with danger and adventure and blends forbidden romance and touching friendship with royal politics to create an addictively exciting read that will have you never wanting it to end.

Set in an eerily, dark world, the storyline of this book is fantasy at its best, driving home all the aspects that make this series great. The characters we came to love in the first novel shine once more as Hart tells of the next stage in Zeraphina’s journey. It was really exciting to be with these characters again, Zeraphina and Rodden in particular as we see that leave the palace at Pergamia and journey to collect various minerals that may help in their fight against the Lharmell’s.

As our heroine, Zeraphina is strong willed and intelligent and more than able to handle her own. Despite her princess status, this is a girl who is well and truly able to stand on her own two feet and who is not shy about telling it like it is. She may hold all the poise and grace of a princess, but as she shows time and time again, this girl is a warrior through and through. Zeraphina is settling into her life as a Harming quite well in this book and she has good naturally accepted what it means to be a Harming.

I found it delicious that many of the questions we have surrounding Rodden were answered in this book. Light was shed on his past and we begin to understand his character a bit more as we learn of what drives him. I’d be lying if I didn’t say Rodden’s heart breaking past got to me, but at least it makes it clear why this honourable, often infuriating yet oh so incredible man is the way he is.

The relationship between Zeraphina and Rodden continues to grow in this book and takes a few unexpected turns. The chemistry is still there and with Rodden finally sharing his past with Zeraphina, it paints their relationship in a new light. There is mutual respect and friendship there between them as well as a decent amount of teasing, but in the end their closeness learns towards something more. No matter what Zeraphina’s mother may want.

Racing all the way to a gripping ending that will have you clawing at the pages, hoping and praying there’s more, Blood Storm is a delightfully dark sequel to Blood Song that is sure to catch you, hook line and sinker and have you eagerly awaiting the third book after a cliff-hanger that will rip your heart out!

Source: Sent for review by Random House Australia (Thank you Dorothy!)
Format: Paperback
AU Release Date: Available now!
Buy it: Booktopia // The Nile // Amazon (For Kindle)
Recommendation: This is a must read for any fantasy fan!
Cover: Love the blue--it's just so incredible striking.
Will I read sequel/continue with series: Oh, yes. Yes, yes!