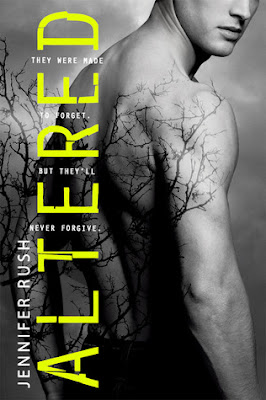 Altered by Jennifer Rush
Releases on: January 2nd 2013.
Add it on Goodreads!

A story that starts with a girl and a boy. A girl who loves a boy so much , she'll risk anything for him. And a boy who knows only one thing--- kill anyone who stands in his way.

When you can’t trust yourself, who can you believe?

Everything about Anna’s life is a secret. Her father works for the Branch at the helm of its latest project: monitoring and administering treatments to the four genetically altered boys in the lab below their farmhouse. There’s Nick, Cas, Trev . . . and Sam, who’s stolen Anna’s heart. When the Branch decides it’s time to take the boys, Sam stages an escape, killing the agents sent to retrieve them.

Anna is torn between following Sam or staying behind in the safety of her everyday life. But her father pushes her to flee, making Sam promise to keep her away from the Branch, at all costs. There’s just one problem. Sam and the boys don’t remember anything before living in the lab—not even their true identities.

Now on the run, Anna soon discovers that she and Sam are connected in more ways than either of them expected. And if they’re both going to survive, they must piece together the clues of their past before the Branch catches up to them and steals it all away.


Thoughts:
This book just looks plain amazeballs! Everything from the killer cover to the description makes me wanna get my hands on it ASAP! With four genetically altered boys I'm hoping Rush is going to follow in the footsteps of Brigid Kemmerer and give us a novel featuring each guy. Fingers crossed! Either way I want this book soooo desperately!

What do you think of Altered? Doesn't it sound awesome?
And, what are YOU waiting on this week!