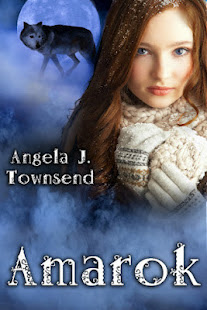 Emma's life has been hell since she moved from sunny California to a remote Alaskan town. Abandoned by her father and living with the guilt of causing her mother's death, she makes a desperate dash for freedom from her abusive stepfather. But when her car skids off the icy road, her planned escape leads to further captivity in a world beyond her imagining.

Dragged across the tundra by an evil mountain man and his enormous black wolf, she learns that love can be found in the most unexpected places. Amarok, as she's nicknamed the wolf, is a young man from the gold-rush era enslaved by an ancient shaman. Emma's gentle touch and kind heart win his love and devotion.

When a vicious madman--trapped in bear form by the same Shaman--attacks the travelers and injures Amarok, Emma must find the strength to face her fears and free the wolf she's come to love. But that means she must face down the evil shaman, a Siberian mammoth hunter from the ice age, and he has no intention of giving up his power to her.

Angela J. Townsend’s debut novel Amarok is a richly descriptive tale of one girls fight for freedom and love, told against an Alaskan backdrop that is delightfully enjoyable!

Despite it’s slow pace, this book was surprisingly addictive and I easily read it in one sitting. It was well written and the lush world of the Alaskan wilderness provided a beautiful setting for the events of this novel. While it’s certainly not the best book I’ve read, nor did it blow me away, I found Amarok to be a really nice, enjoyable read. There were a few things I was unsure of in regards to plot, and at times I did struggle with the connection between Emma and Amarok that comes on so suddenly, but as a whole I easily found myself engrossed in this story.

Townsend tells of Native American tales as well as stories of Sharman and curses as she details Emma’s journey after being kidnapped by a reclusive and evil “mountain man”. Told in dual perspective, the short chapters revert back and forth between main characters Emma and the “wolf” Amarok.

As a heroine, Emma was decent enough and fit the story well. Strong and brave, with a tortured past and painful home life, Emma never gave up and was a fighter from the very beginning. I found I really adored Amarok and loved seeing things from his eyes, especially as a wolf. Townsend had written his POV very well and you can’t deny the anguish and frustration he feels being trapped as a wolf.

Admittedly, the bond that forms between Emma and Amarok stems a lot from the fact that they both have no one. Alone and lonely, both know only cruelty and the kindness and affection they find in one another connects them as they go through their tremendous journey. Honestly, I think the “love” they feel for one another, especially on Amarok’s side, comes on very suddenly but I still believe the bond they share, if not the love.

Overall, Amarok is an exciting read, one that left me wanting more!

Source: Sent for review by Spencer Hill Press. (Thank you Kate!)
Format: Paperback ARC.
Pre-order it: Amazon // The Book Depository
Recommendation: If you're after something different.
Cover: I like the blue and the girl is how I picture Emma perfectly.
Will I read sequel/continue with series: This is a stand alone.