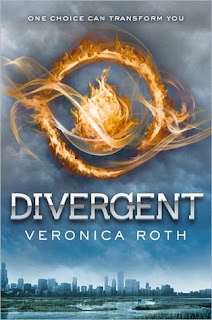 In Beatrice Prior's dystopian Chicago, society is divided into five factions, each dedicated to the cultivation of a particular virtueshe can't have both. So she makes a choice that surprises everyone, including herself. During the highly competitive initiation that follows, Beatrice renames herself Tris and struggles to determine who her friends really areand where, exactly, a romance with a sometimes fascinating, sometimes infuriating boy fits into the life she's chosen. But Tris also has a secret, one she's kept hidden from everyone because she's been warned it can mean death. And as she discovers a growing conflict that threatens to unravel her seemingly perfect society, she also learns that her secret might help her save those she loves . . . or it might destroy her. (Blurb from Goodreads....)

I’m not even sure there are words to accurately describe the brilliance that is Divergent. Veronica Roth’s debut novel is completely compelling and exciting; a dystopian novel in a world of its own! This action packed and driven tale is full of depth and emotion and will sweep you up into a futuristic world so dark, yet enticing you’ll dread ever having to leave!

Divergent was tipped as one of the best books of last year and as someone only just stumbling into the dystopian genre, I wasn’t sure what to expect. I don’t think I’ve spoken to anyone who has had anything negative to say about Divergent, but I was still hesitant. Now, having finished this, I feel as though I wasted an entire year of my life; a year I could of spend reading Divergent! I’m not even sure I’m able to write a review that does this book justice. It’s incredible, simply incredible. It deserves every single bit of praise it has ever received and then some!

From the very first chapter, the world Veronica Roth has created had my attention. Inexplicitly. From the very beginning Tris’s choices and the decisions she faced had my heart pounding and my adrenaline pumping. This happens to me often with books, but never so early on. Divergent is one of those rare books where the world is so cleverly crafted by the author that it takes on an entire life of its own. Every element, every aspect that churns within it is so compelling and there’s such an aura of importance to every choice each of the characters make. Every moment of action, humour, romance and betrayal have the ability to capture you completely in a way that connects you to the book.

Each and every character within this book is exceptional. Colouring the book with individual personality, drives and fears, every individual Tris meets throughout the story will captivate you with their complicated natures and in some cases, devious intentions. From the friends she makes in the Dauntless faction, to the family she leaves behind, they will all spark your interest and make you think about their motivations.

Divergent really explores the complexity of human nature. In a dystopian society divided into 5 factions, individuals are allowed to choose the faction they will forever belong to at the age of sixteen. Choosing between Erudite (the intelligent), Abnegation (the selfless), Candor (the honest), Amity (the peaceful) or Dauntless (the brave), initiates will either remain with their family or transfer and begin a new live with their newly chosen faction. The idea itself is so intriguing, but factor in that nothing is as it seems and things really begin to get interesting. Each faction prides itself on one basic human characteristic, but we as human beings are complex creatures. We are never one thing. We cannot be completely selfless—we simply don’t have it in us, nor can we be always brave and never show fear. In human nature no one is black and white and we all have a little bit of everything in us. It’s these small inconsistencies that make us who we are and when the collective focus is on one driving trait above all others the outcome is an individual so warped with this impossible sense of who they are that they simply can’t function in any other way.

Beatrice Prior is from Abnegation. She’s been taught to think, act and believe certain things; to always put others above herself and to be completely selfless. However this isn’t her. She doesn’t fit in with the members of her faction and when the choice comes to choose, Beatrice makes a choice that will change everything she’s ever known. Becoming Tris, she soon learns of the tough initiation process that will either make her a Dauntless or see her faction-less....forever. Plus, Tris isn’t normal....Tris is Divergent and she has to hide this from her newfound friends and faction or loose them regardless.

Tris has to be one of the best characters I’ve ever heard about! Honestly, I’m totally girl-crushing on her right now. Tris is everything I love in a heroine and it was an absolute pleasure reading about her. Being Divergent makes Tris so much more than what people expect her to be and it’s the flaws she holds and her struggle to define who she is that makes her so relatable and fantastic to read about. Her “voice” within the book is a constant tether to all that it means to be human. She hold so many traits that would make her Abnegation, but she wars with the other part of herself that covets being strong and independent; able to take care of herself and to be seen that way by others. There’s so much growth in Tris throughout this book; from the small, miniscule rebels she makes in the beginning, progressing all the way in length throughout the book to the sacrifices she’s willing to make in the end. The choices Tris has to make and the decisions she chooses were a constant reminder to me of the desperate situation she was in where failing simply wasn’t an option, no matter how hard, how meek things became. Tris found the light and the good in moments that helped shape her and I loved watching every moment of that.

When it comes to talking about Four my initial response is to either swoon or drool, perhaps a bit of both, but I’m going to try to coherently talk about why I love this guy. Upon her arrival at the Dauntless camp Tris soon meets Four and I’d be lying if I didn’t mention that he caught my attention from the get go. However as the novel progressed, every action of his made me fall for him a little bit more and here’s why....Four is tough, fierce and an incredible character. As a Dauntless trainer he’s fearsome and slightly frightening, but underneath he’s a man not afraid to face his fears and who wants to be the best person he can be. As the story evolves you quickly learn that Four isn’t who he appears and while I easily pieced together his true identity, it didn’t lessen the fun of watching it all unfold before my very eyes. He’s had a hard life and towards the end of the book it becomes apparent that he still bares the scars of that life and it’s this vulnerability that helps to add to his complexity. How can someone be so brave and strong, yet be so human and you not love them?

For all her inner strength Tris is still exceptionally innocent. Coming from a faction where physical contact and intimacy isn’t broadcast, Tris has never kissed a boy let alone been drawn to one as she finds herself drawn to Four. At first, she doesn’t understand the small signs in the pit of her stomach that signal her attraction to Four. Having never experienced something like that before, it’s sweet watching their relationship develop from trainer and innate to friends and then eventually to something more. The sexual tension between the two of them is electric despite their experience and every touch, kiss and caress holds so much power.

Brimming with action and adventure, Divergent’s masterful tale of love, betrayal and self discovery will leave you begging for more! The explosive ending will have you breathless and wanting to get your hands on the next book, Insurgent as soon as it’s released!

Source: I Bought.
Format: Paperback.
Recommend: YES!
Recommend borrow or buy: Buy it--you need to own this!
Cover: I'm in two minds about the cover. I see good sides to it, but I also don't think it does the book justice.
Read sequel/continue with series: Hell to the yes!