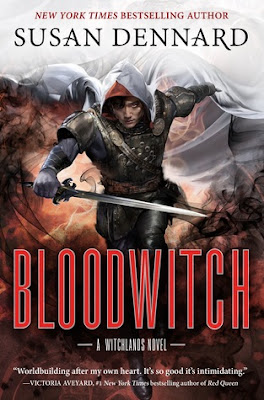 High in a snowy mountain range, a monastery that holds more than just faith clings to the side of a cliff. Below, thwarted by a lake, a bloodthirsty horde of raiders await the coming of winter and the frozen path to destroy the sanctuary and its secrets.

The Bloodwitch Aeduan has teamed up with the Threadwitch Iseult and the magical girl Owl to stop the destruction. But to do so, he must confront his own father, and his past.

Bloodwitch is the third novel in The Witchlands series by Susan Dennard and is another deftly written instalment with a lush atmosphere and a compelling storyline.

As a boy Bloodwitch Aeduan spent the majority of his life in a monastery high-up in the snowy mountain range, mastering the abilities that run in his blood that make him an unwavering assassin; almost invincible in nature. Years later, Aeduan finds himself teaming up with a Threadwitch by the name of Iseult and a peculiar child named Owl in an effort to stop raiders from breaching the sanctuary. Used to his own company, Aeduan must learn to work with another but after years of exile and ostracisation, relying on someone else does not come naturally to Aeduan. In order to save the monastery, Aeduan will need to face his father and his past, but there’s a curse upon him that very well may kill him first….

After enjoying the first two novels in this series immensely I was so very excited to read Bloodwitch. Like many readers, I fell in love with Aeduan during Truthwitch and Windwitch and have been eagerly awaiting the time when I could get inside his head and follow him primarily. I will admit it took me longer than I would have liked to get into the groove of the story, however I do attribute this to being so long since I read the previous novel and I did eventually get lost in the story and the plight of the characters.

Set in a vivid and complex fantasy world, Bloodwitch is told in the third person and centres around a number of different characters. There’s no denying that there are a lot of voices powering this series with Susan Dennard introducing many different viewpoints throughout each novel. Aeduan, Safi, Iseult, Merick, Vivia and Stix are a few of the main ones and readers will be forgiven for feeling overwhelmed on occasion by the vast number of different perspectives within the story. I do feel though that the multitude of characters does work well for this type of series. Much of what unfolds sees the characters separated often across land and sea so Susan Dennard’s ability to explore different perspectives allows for a more well-rounded and detailed story.

Overall the characters are all easy enough to follow. The hopeless romantic in me enjoys seeing Aeduan and Iesult’s relationship move towards a romance, with the same true of Safi and Merrick’s relationship. Safi and Iesult are parted in this novel so both girls lead individual journeys. I devoured every simmering moment of unexpected connection between Iesult and Aeduan and look forward to seeing a romance come to fuition between them in hopefully the next novel. I also adored the complexity of Aeduan’s character as he was somewhat jades and defeated by life in a way I wasn’t necessarily expecting.

The final few chapters of Bloodwitch were without a doubt the most eventful and leave me keen to see what happens next. Susan Dennard continues to tell this adventurous series beautifully and I can’t wait to loose myself in the next instalment as soon as it is released!