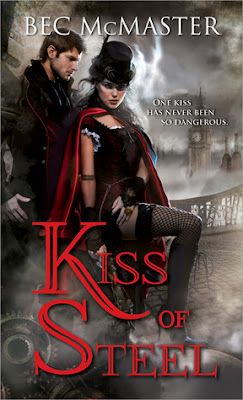 When Nowhere Is Safe

Most people avoid the dreaded Whitechapel district. For Honoria Todd, it's the last safe haven. But at what price?

Blade is known as the master of the rookeries—no one dares cross him. It's been said he faced down the Echelon's army single-handedly, that ever since being infected by the blood-craving he's been quicker, stronger, and almost immortal.

When Honoria shows up at his door, his tenuous control comes close to snapping. She's so...innocent. He doesn't see her backbone of steel—or that she could be the very salvation he's been seeking.

Kiss of Steel is the first novel in Bec McMaster’s London Streampunk series and is a spectacular start to what I have no doubt is going to be a brilliant, riveting and highly romantic series!

In a world where vampires, werewolves and clockwork creatures exist, nowhere is safe for Honoria Todd and her younger siblings. Hiding from a Duke with heinous plans, Honoria has no choice but to turn to a man whose reputation paints him as more monster than man. Blade is the master of the rookeries and no one dares cross him. Until a young woman with secrets shows up at his door asking for his help. Close to snapping as the virus running through his veins reaches breaking point, Blade should turn Honoria away but there’s something about the innocent and beautiful young woman he’s drawn to even if she refuses listen to most of what he has to say. From different worlds but drawn to each other Honoria and Blade soon discover that salvation, is closer than either of them thinks.

Bec McMaster bewitched me from the very beginning with Kiss of Steel. I’m honestly kicking myself that it’s taken me so long to begin this series as I was completely besotted as soon as I began reading Honoria and Blades story. Beautifully written, the world McMaster has brought to life is a vivid and darkly enchanting steampunk world. Steampunk is sometimes hit and miss for me but BOY does Bec McMaster hit the nail on the head with this series so far. I’m already in love with the characters and excited about the prospect of following them in further novels.

Kiss of Steel unfolds through both Honoria and Blades back and forth perspectives which allows for a very well rounded view of the characters and the story. I genuinely fell in love with Honoria and Blade quite quickly and adored the push and pull connection they fought throughout the story. Honoria was a woman of her times but also very strong headed and capable who was willing to do what she needed to protect her siblings while Blade was the dashing rogue; raw and rough around the edges but who cares deeply about those he considers “his” and those under his protection.

McMaster writes the tension between Honoria and Blade perfectly. They’re electric and sizzling and light up the pages with their chemistry. Stolen kisses and touches build towards some swoon inducing love scenes that are written impeccably on Bec McMaster’s part. Theirs was a romance I felt I could get behind and enjoy seeing develop.

Filled with tangible side characters and with plenty of possibility for the rest of the series, Bec McMaster has guaranteed Kiss of Steel will only be the first of her novels I’ll read. Can’t wait to begin Will and Lena’s tale next and get lost in their story!

Source: Purchased by me
Publisher: Sourcebooks
Format: Paperback
Release Date: September 4th 2012
Buy: Angus & Robertson | Booktopia | The Book Depository | Amazon
Final Thoughts: I really enjoyed this book and am ready to start the next one!