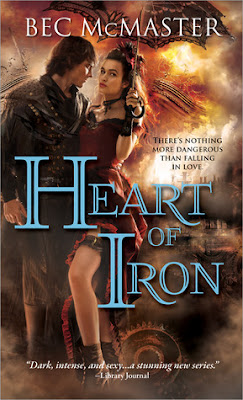 In Victorian London, if you’re not a blue blood of the Echelon then you’re nothing at all. The Great Houses rule the city with an iron fist, imposing their strict ‘blood taxes’ on the nation, and the Queen is merely a puppet on a string…

Lena Todd makes the perfect spy. Nobody suspects the flirtatious debutante could be a sympathizer for the humanist movement haunting London’s vicious blue blood elite. Not even the ruthless Will Carver, the one man she can’t twist around her little finger, and the one man whose kiss she can’t forget…

Stricken with the loupe and considered little more than a slave-without-a-collar to the blue bloods, Will wants nothing to do with the Echelon or the dangerous beauty who drives him to the very edge of control. But when he finds a coded letter on Lena—a code that matches one he saw on a fire-bombing suspect—he realizes she’s in trouble. To protect her, he must seduce the truth from her.

With the humanists looking to start a war with the Echelon, Lena and Will must race against time—and an automaton army—to stop the humanist plot before it’s too late. But as they fight to save a city on the brink of revolution, the greatest danger might just be to their hearts…

Heart of Iron is the second novel in Bec McMaster’s London Steampunk series and is a thrilling and passionate sequel, easily as good as it’s predecessor!

Will Carver knows how people see him; dangerous, unpredictable, a monster. No matter how hard he works to suppress his verewolfen side, Will knows he’ll never be one of polite society. And that’s fine. He’s never wanted to be, until Lena. Lena Todd is used to navigating blue blood society. No one suspects she’s more than a flirty debutante and that’s just the way she likes it; allowing her to be the perfect spy. But there’s one thing that threatens Lena’s place in society and that’s Will. Will who ignites her desires and whose kiss she can’t forget. Lena has spent years trying to avoid Will but when she’s asked to help him integrate with society, Lena soon realises that the feelings they share can’t be denied.

Bec McMaster has done it again with Heart of Iron! After the brilliance of the first novel, I felt she masterfully followed it up with this sequel, featuring Will and Lena. Continuing to detail a vivid and dangerous world of vampires, werewolves and monsters, McMaster keeps building the storyline and bringing her world to life with colour and personality. As the reader I’m sucked into her world and addicted and to the characters and their stories. I want to know more. I need to know more about Leo and Jasper and Rosalind.

Following Will and Lena in alternating chapters, Heart of Iron is a deeply romantic and sexy novel with another wonderfully explored romance at the helm. Will and Lena are loveable and likeable and have another wonderful connection together. McMaster certainly knows how to heat the pages with the sex scenes she deftly builds up to as well as all the sweet touches and moments of endearment as Will and Lena find their way to each other.

There’s so much about this series to love and it’s fast becoming a favourite of mine amongst the steampunk genre. Bec McMaster writes beautifully this Victorian world with a mechanical twist and fills it with characters you can’t help but love. Heart of Iron was a wonderful read I just devoured and I can’t wait to begin the next one as soon as possible!